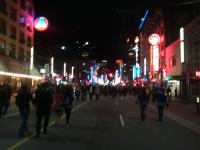 Yesterday afternoon the streets of downtown Vancouver had almost more officers in police uniforms than it did people. The Vancouver Canucks had gone up 3-0 on the Chicago Blackhawks and were on the verge of the biggest collapse in the history of the NHL, it would have been too much for crazy Canucks fans, riots would have broken out if they had lost…

The Canucks had been knocked out of the playoffs twice before by the Blackhawks and if it happened again, that team would have been blown up, along with the city. Vancouver goalie Roberto Luongo had been criticized and for his play and the doubters were ready to throw him and head coach Alain Vigneault under the bust if the Canucks didn’t win Game 7. The entire reputation of the franchise and the city was on the line last night.

In a game that evoked memories of the Olympic gold medal game, the Vancouver Canucks managed to defeat the defending Stanley Cup champions 2-1 in overtime. Alex Burrows has become a Canuck legend by scoring both goals including the epic overtime winner. The Canucks will now advance to second round of the NHL playoffs where they will face the Nashville Predators.

I was in Vancouver City last night taking in all the madness. It was like the Winter Olympics, people left their homes and flocked to downtown city streets in mass numbers. Hi-fives, Canadian flags and chants of “Preds are dead” and “We want the Cup” echoed throughout the city streets. It couldn’t have been more than 7 degrees Celsius last night, but that didn’t stop hundreds of girls from flashing their boobs. It truly was an epic party.

As for the hundreds of police on hand, they joined in the fun, giving hi-fives to fans enjoying the party themselves. It’s amazing what one win can do for a city that has been starved for a playoff run.

The boys in blue are off to the next round, which means more drinking and carrying on for the city of Vancouver!