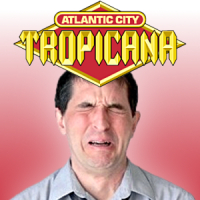 Casinos on the Las Vegas Strip just recorded their highest win since September 2008. The Nevada Gaming Control Board reported March Strip winnings at $527.3m, up 12.9% over March 2010. Slots revenue was down 0.6%, but table games wagers increased 8.1%. Baccarat win was up 55% over March 2010, while overall baccarat wagers were up 13%. Statewide, casino win rose a more modest 5%, but it’s still the first yearly increase in a while, so nobody’s complaining.

Nevada’s success will likely rub a little salt into Atlantic City’s wounds. Or perhaps that deed was already done by the lone blackjack player who singlehandedly turned a winning month into a losing one for the Tropicana Casino and Resort. The player, whom the Tropicana’s outgoing CEO Mark Giannantonio declined to identify, was “the single-largest winner in our history,” taking the Tropicana for $5.8m, leading to an overall blackjack loss in April of $1.86m.

Gaming Industry Observer’s Michael Pollock told NJ.com that “when you attempt to target the high end player market, volatility will be part of it.” Jim Wortman, director of gaming education and research at the University of Houston, just wants “to make sure the guy … is that good, and not that he’s cheating or our dealers are that bad. Generally, I would have more eyes on this guy than if he’s sitting there naked.”

Casino Control Commission spokesman Daniel Heneghan believed the proportion of the Tropicana’s blackjack deficit was unprecedented in the state’s 33 years of casino gambling. CEO Giannantonio was fired last week. Coincidence? Either way, bet his replacement Tony Rodio will keep an extra sharp eye on the blackjack tables his first couple weeks on the job.