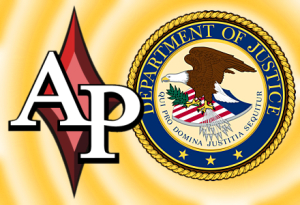 ✖ The US Department of Justice has confirmed it has entered into an agreement with Absolute Poker to facilitate the return of US player balances, similar to the agreements previously entered into with the other indicted Black Friday companies, PokerStars and Full Tilt. Absolute’s parent company Blanca Games had issued a couple press releases announcing the deal on Tuesday, but it hadn’t actually been finalized until Wednesday.

[UPDATE] READ THE AGREEMENT IN FULL

The agreement “will provide assurances to third parties working with Absolute Poker in its legitimate efforts to return funds to US players.” Absolute Poker agreed “that it would not allow for, facilitate, or provide the ability for players located in the United States to play online poker for “real money” or any other thing of value. The deposit of funds is expressly prohibited.” However, the DoJ says it has not, nor will it, interfere with AP’s ability to conduct business with players beyond US borders.

An independent Monitor is to be appointed to ensure AP’s compliance with the restrictions re US players. AP will “have the ability to recommend possible monitors.” (In other words, they get no say whatsoever.) One wonders exactly what will happen if AP doesn’t actually start enforcing these restrictions by the time said Monitor is appointed. While it claims to have already closed off its US-facing operation, US players continue to take part in real money games on the site. Doesn’t really bode well for AP compliance with other aspects of the agreement.

For their end, AP/UB must retain all their financial transaction records, databases, internal emails and all business records generally. What they don’t get is their domains. “Absolute Poker expressly understands that under this Agreement, the domains names absolutepoker.com, ub.com and ultimatebet.com are still seized and Absolute Poker hereby waives any right to challenge such seizure during the pendency of this Agreement.”

✖ Somewhat unrelated, but Preet Bharara, the US Attorney for the Southern District of New York that brought the Black Friday indictments, won a major victory on Wednesday with the conviction of billionaire hedge-fund manager Ray Raharatnam on fraud and conspiracy charges relating to insider trading. A Manhattan jury found former Galleon Group CEO Raharatnam guilty on all 14 counts. The conviction will help burnish Bharara’s image as a tough prosecutor who tends to only bring prosecutions when he feels he can win in court.

✖ Haley Hintze’s blog has reprinted excerpts of a lengthy Dagens Naeringsliv article on Madeira Fjord, the Norwegian shell company set up in 2007 to facilitate payments to AP shareholders. The article, by DN reporters Goran Skallmo and Knut Like, includes the following exchange with Bjorn Blix, an attorney at Norwegian law firm Bull & Co., who’d billed Madeira Fjord for significant sums (including $550k for one and a half months work in the autumn of 2010), yet seemingly had no idea (nor any real curiosity) as to where the funds originated.

– Have Madeira Fjord accounts in the US?
– No, no.
– But the transfer must show who the sender is?
– No, it does not, said Blix.
– So you simply do not know who has paid you for the assignment?
– No, says Blix and goes his way.

In related news, Hintze has been hired by Dimat Enterprises to write a book on the AP/UB cheating scandal. The as yet untitled book is expected to be released this fall.

✖ World Series of Poker organizers aren’t sure how negative an effect Black Friday will have on the number of participants in this year’s event. With the loss of WSOP satellite tournaments formerly run by the indicted poker sites, the fear is that far fewer players will be able to fund the WSOP buy-in on their own. WSOP exec director Ty Stewart admitted that the situation was “a complete unknown. But that is a very salient factor right now.” Stewart also didn’t expect to see many players wearing logos of any of the indicted companies at this year’s event. “It would be like walking into a PETA convention wearing a fur coat.”

✖ How about walking into a lion’s den wearing Lady Gaga’s meat coat? Another day has brought yet another over the top press release from Lock Poker, this one trumpeting the preposterous statistic that “almost 70%” of the indicted poker companies’ US player base has now migrated over to Lock Poker. Wow… Perhaps all those hundreds of millions of dollars Lock is now generating will finally allow Lock CEO Jennifer Larson to move her operation out of her Vancouver condo … or pay the mammoth legal fees she’ll undoubtedly incur when the next round of indictments drops.