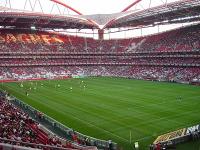 It was around this time last season that Bodog-sponsored Fulham were dreaming of a place in the UEFA Europa League final in Hamburg. This year’s semi finals have a distinct feeling of simply being an extension of Portugal’s domestic cup competition with three of the four semi finalists from the country.

The tie that involves two Portuguese sides pits storied Benfica against relative minnows Braga. Don’t be at all fooled by Braga though. They were narrowly knocked out of the group stage of the Champions League and have already claimed the scalps of Liverpool, Arsenal, Sevilla and Dynamo Kiev with their imperious home form. Away from home is where they might struggle but their solidity at the back will likely frustrate the former champions of Europe lining up against them.

Benfica are quite understandably favorites to progress though. A side that is a who’s who of young Iberian talent and those that have failed elsewhere in Europe but now thrive in the Portuguese capital. Both sides dropped out of this season’s Champions League at the group stage and this fact will continue to give weight to the notion that this is as second rate as you can get in Europe.

The other semi final also has an Iberian flavor in that Porto’s opponents are the attractive Spanish outfit Villarreal. Porto currently leads their domestic league by a country mile having only dropped four points over the entire season and will be confident of making it an all Portuguese final. Their mauling of Spartak Moscow in the previous round only goes to demonstrate how much of a threat they are.

That’s not to discount Villarreal who have European pedigree having reached a Champions League semi final back in 2006 and are regularly challenging for champions of La Liga minus Real Madrid and Barcelona. The partnership between Nilmar and Giuseppe Rossi will be pivotal to any success the Yellow Submarine has in this encounter.

You have to fancy Porto to progress to the final with their formidable record under Andre Villas-Boas and Dublin could prove the platform for Boas to launch his career elsewhere. The other semi final is anybody’s guess so I’m just going to stick my neck out and say that there will be a Portuguese presence in Dublin’s final.