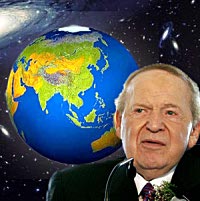 Las Vegas Sands recently filed a counterclaim in its wrongful dismissal fight with Steve Jacobs. Sands claims that former Sands China CEO Jacobs was let go because he refused to end a VIP relationship with a junket operator known to have links with Cheung Chi Tai (alleged head of the Wo Hop To criminal triad). Plus, you know, the whole extortion thing. According to Sands, once Jacobs knew he was out the door, he threatened to publicly dish the dirt unless “he was paid money to which he was not entitled.”

When Sands refused to ante up, Jacobs filed his lawsuit, in which he alleged that (among other things) Sands had collected incriminating business and financial data on high-ranking Macau officials to give the company ‘leverage’ in future negotiations. Jacobs even claimed to have one of these officials’ secret dossiers in his possession. Jacobs’ headline-grabbing claims were thought to have directly influenced Hong Kong regulators to require Sands China to submit certain financial documents for review.

Sands’ counterclaim attempts a little legal jujitsu by flipping Jacobs’ allegations back on him. Sands claims it was Jacobs who commissioned these intelligence fishing trips, which explains how he came to have one of the things in his possession. (Well played, sirs.) Then they start raining elbows to Jacobs’ forehead, calling his lawsuit “the vehicle to continue his defamatory and malicious crusade against LVS and [Sheldon] Adelson.” Barring a deal, the two sides are expected to go to trial around June 2012.

ELSEWHERE…
Legendary Newcastle hard man and Premier League all-time top scorer Alan Shearer has signed on as Asian Ambassador for online betting outfit Dafabet, a subsidiary of AsianLogic. During Newcastle’s rout of Aston Villa last August, Shearer was observed in the stands kissing a betting slip. This August, will he be spotted kissing a Dafabet logo on his smartphone?

This is a bit overdue, but Malaysian tycoon Vincent Tan has quashed speculation that he was selling a 49% stake in Berjaya Sports Toto’s gaming unit. Sports Toto Malaysia has 680 retail outlets that offer numbers games, which generated 3.6b ringgit (US$1.2b) in 2009. The rumored price for that 49% stake was about a billion American, but the board claims they are “no longer pursuing … a strategic investor.” Mr. Tan’s Berjaya Group also controls Malaysia’s McDonalds and Seven-Eleven franchises, media outlets and some real estate.

A shortage of small-denomination bills in Burma/Myanmar is creating problems for retailers. They simply don’t have enough of the bills or coins to make change for customers. In response, some enterprising retailers are running informal betting operations at the till, offering customers an option to make some kind of wager (like guessing the serial number of a banknote) with the change they’re owed – to let it ride, essentially – for the chance to win a banknote of a larger, more readily available denomination. The government is pissed off at the retailers for encouraging gambling, and the retailers are equally pissed off at their rulers for not printing enough money. Perhaps Burma should outsource that contract to the US – printing money is pretty much all they do nowadays.

Finally, we know Singapore is wild about its two über-successful integrated resorts, but Marina Bay Sands and Resorts World Sentosa have inspired party planners to throw wildly popular cash-free casino-themed parties in people’s homes. Guests are given fake cash when they arrive, then they drink and play roulette and other table games, and whomever has the most play money (besides Uncle Sam) at the end of the night wins a TV set or a holiday cruise or something. The planners claim some happy couples are even having casino-themed wedding receptions. Perhaps the bride tosses dice instead of a bouquet?