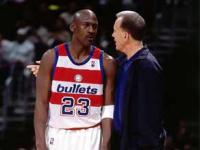 This year represents a change in the usual trend as far as coaches go. Typically, at this point, with only a few games left in the season, there’s plenty of talk about which coaches will be getting the axe. This year, there’s more talk about the many coaches in the league that deserve Coach Of The Year Award consideration.

Among the leading candidates for the award is Tom Thibodeau, the head coach for the Chicago Bulls. In his first season as coach of the Bulls Thibodeau has turned the Bulls from barely making the playoffs a year ago, into the Eastern Conference division leaders, and possibly division leaders. The Bulls are more than just a great turn around year team, with MVP leading candidate Derrick Rose, they are contenders for the NBA title.

Without question, Thibodeau defensive genius is the chief reasons the Bulls are having their best season since #23 and #33 did it for the love.

If I had a vote, I’d give it to Doug Collins though. Loved his commentary as an analyst and his philosophy in basketball is one of the many reasons he’s always been highly respected in NBA circles. Collins has now infused that philosophy on a team that heading into this season had no direction, had no culture and had no identity. The Philadelphia 76ers were expected to cellar dwellers this year, Collins has turned them into a team that could sneak an upset if a favourite gets caught slipping. Celtics?

Of course, Phil Jackson and Greg Popovich deserve consideration, but they are expected to be good, if not great, and they have the players to do it.

What about the job Nate McMillan has done in Portland? If I had two votes, my second vote would go to Nate McMillan. The Blazers have had a long list of injuries, they lost Greg Oden again, and now Brandon Roy is a fraction of his former self. That’s two franchise pieces wiped out, and somehow, Nate McMillan has managed to piece that team back to together and establish LaMarcus Aldridge as the team leader and a blossoming superstar and Batun on the cusp. Portland could be a dangerous team for their first round matchup, and they have to like their chances against a Dallas team that could be susceptible to the upset.

What about Monty Williams? Who? Monty Williams the Head Coach for the New Orleans Hornets successfully clinched a playoff spot in the most competitive conference in the league, in his first full season with the club. Yes, Chris Paul is really that good.
Rick Adelman deserves some love for keeping the Rockets competitive and Lionel Hollins deserves props for keeping that Memphis team focussed.

He won’t get any consideration, but at the end of the day, Erik Spoelstra did a pretty damn good job considering the media circus and all the distractions his Miami Heat team faced. He has the Heat poised to try and make a run for the Eastern Conference Championship.