Home / Sports / The most unlikely inductee to the 100 goal club 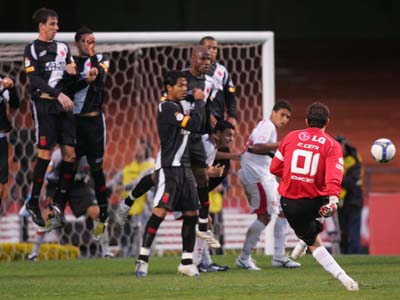 Reporting that a Brazilian soccer player has made it to a century of goals doesn’t sound at all remarkable on its own. This is the country that produced the man recognized as the world’s greatest ever soccer player, Pele, and the man that has scored the most goals in the history of the World Cup, Ronaldo.

Those achievements pale in comparison when you consider the record of fellow countryman Rogério Ceni.

Ceni was in the same 2002 World Cup squad as Ronaldo but was simply the third choice goalkeeper – that’s the guy who is almost guaranteed to get no time on the field of play and just resorts to doing what it is that footballers do in their spare time. Ceni obviously didn’t read the job description when he became a goalkeeper and after scoring a free kick this weekend he has now reached 100 goals for his club Sao Paulo.

Ceni said, “It was beautiful. As a goalkeeper, you don’t enter the match thinking about scoring a goal, but it happened just as I wanted: with a free kick, deciding an important match. For me, it doesn’t matter that it was against Corinthians, but for the fans it must have been important.”

According to world governing body, FIFA, the goal was actually only Ceni’s 98th, as they don’t recognize two scored in unofficial friendlies, but the fact he’s getting anywhere near to 100 in the first place is remarkable enough in itself. It’s the kind of novelty bet that you would put on when hammered on a crate of Brahma beer and Tequila shots at the Rio Carnival and immediately regret it – that’s until it actually comes off.

Next record to be broken by Ceni…score for the Brazilian national team. He’ll have to make it into the squad first though. This is some celebration though…