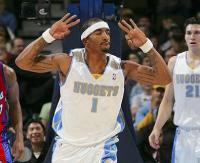 Since trading Carmelo Anthony to the New York Knicks at the All-Star break the Denver Nuggets have been one of the best teams in the NBA. The Nuggets are 11-4 since the trade and are undefeated at home. The Nugget just knocked off the Spurs, who were missing Tim Duncan due to an injured ankle, but the way the Nuggets have been playing at home, it might not have mattered.

As soon as Anthony left Denver, the remaining Nugget players seem to have found their stride. Nene is among the league leaders in field goal percentage, Lawson and Felton look like the reincarnation of Dumars and Thomas…That’s a stretch, but they do compliment each other quite nicely.

The New York players acquired in the deal have fit in nicely and Wilson Chandler is emerging as a future star in the NBA. With just three weeks left in the season, the Denver Nuggets are the last team any team should want to play. If the playoffs started today, they would face the Oklahoma Thunder in what would be an exciting first round match-up.

As for the Knicks, well, they’re still ironing out the kinks. Even with Melo and Billups in the lineup the Knicks have proven that they are capable of losing to any team in the league, including the Cleveland Cavaliers. Since Melo joined the team the team’s second half defence has been among the worst in the league and the Knicks are just 7-10 since the trade.

But it’s not time to panic. If Miami is any indication, it takes a while for superstars to learn to play together. The Knicks are also a team that doesn’t need to worry about what seed they get heading into the playoffs, they just need to get there. Once in the playoffs, with star power on the Knicks, they could be handful for any team they face.