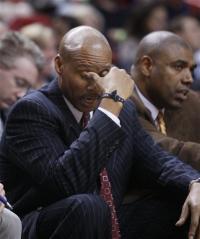 If Blake Griffin and the Clippers do their job on Friday night and beat the breaks off the Cleveland Cavaliers like everyone else does and the Spurs do what they do best, that is, win against the Wizards on Saturday, the stage will be set for Sunday where the NBA can showcase Rat ball’s finest teams going head to head.

If there ever was a meaningless game that could actually mean something, this would be it. The only problem is the winner of this game can celebrate only the fact that they are the second biggest losers in the NBA.

If things go as they should, heading into the Sunday matchup between the Wizards and the Cavs, the Cavs would have lost 27 straight games and the Wizards will have lost 25 straight road games. Both teams have actually managed to give shitty basketball a bad name. But on Sunday, something has to give.

The game will be played at Quicken Loans, the ghost town that used to be house that Lebron built.
Really, the only significance of this game lies in the value it could produce for Sportsbooks, that is if the Clippers don’t mess this up for everyone tomorrow night. As the subject of every punchline and the brunt of every NBA joke, the losing streaks of both teams have become the laughing stalk of the NBA. It could be the first time that two awful teams generate plenty of betting action.

So, who wins? Who cares?

You can’t really go into stats to break this one down, unless you want to depress yourself, both teams are terrible, let’s just leave it at that. But if a winner must be chosen, we should all be pulling for the Wizards to win. Why? So we can continue to bet and laugh at how long the Cavs losing streak will last, of course.

If it gets to 30 games, maybe Jamie Foxx can do a remix with DJ Khalid, “All we do is lose, lose lose…no matter what.“

But I have higher aspirations for the Cavs. Sure, setting the record for most consecutive games lost was nice, but I think they`re better than that. I think this team can really put themselves in the history books if they try hard enough and match the 1972-73 Philadelphia 76ers for the most losses in a single season at 73. That would require them to win just one more game for the rest of the season, and they have the talent to do it.

At the very least, I`m hoping they put a 70 spot in the loss column. Why come this far and not go all the way?

Just to give you an idea of the level of futility the Cavs are approaching, if they lose on Friday night to the Clippers, they will eclipse the worst losing streak in all of major professional sports. Gold star if you can guess the team and the sport…

Times up. That dubious honor was previously held by the Tampa Bay Buccaneers, who when they first entered the NFL in 1976 lost 26 straight games. But at least they were an expansion team.

As for LeBron, he thinks the game should be nationally televised, but HE would say some ignorant shit like that.