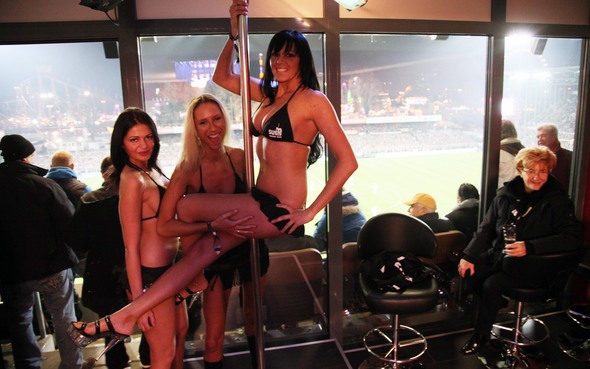 When you hear news about soccer teams and strip clubs then more often than not it would be a safe £10 were you to put your money on it being one of the club’s players. To find out it’s actually happening in the stadium on a match day may well be the music that soccer fans have been longing to hear.

The scene is Hamburg in Germany, a city known for its red light district and the proliferation of sex clubs around the northern port city. Until this season, the city hadn’t played host to two top-flight soccer teams for some time. The promotion of St Pauli changed this. Now it seems like these same strip club owners are cashing in.

According to the Observer, the club has said publicly that executives from Susi’s Show Bar “must stop using their executive box for stripping purposes during Bundesliga games.” It comes after the executives had installed a pole and mirror while holding shows for guests attending the game.

St Pauli president Stefan Orth said: “They can do what they like after games. It was all just too much.”

It might have been a bit too far for the people over at St Pauli but here at the tablog this has got us thinking about what a good idea turning an executive box into a party venue is. We’d have gamblin’, drinkin’, carryin’ on, and that’s just while the game’s on. That’s assuming the “they can do what they like after games” applies to every stadium in the world.