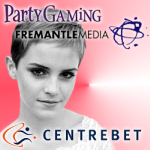 FremantleMedia, the content and production division of European broadcast giants RTL Group, is looking to match its branded content with online slot developers. In order to find ways to wring even more money from Fremantle properties such as X Factor, The Price Is Right and Got Talent (among many, many others), the company has tapped former IGT Wagerworks man Simon Murphy to drum up slots business in Europe, Asia and the Middle East (but focusing mainly on the UK, Italy and Scandinavia). Murphy is already working with developers Electracade on projects for Betfair, Rank Group and William Hill.

Aussie bookmakers Centrebet are under fire at home over their recent stadium naming rights deal with the National Rugby League’s Penrith Panthers. The five-year AUD $1.5m pact marks the first time an Australian sports ground has adopted a bookie’s name. The Federal Minister for Sport, Mark Arbib, says the deal is not a concern, but the usual anti-gambling suspects like Sen. Nick Xenophon have raised their usual hue and cry, prompting Centrebet spokesman Neil Evans to deliver a sharp verbal kick to Xenophon’s down-unders.

”The ‘anti brigade’ are becoming like cracked records. Why don’t they survey the blokes walking into the ground, down at the shopping mall, on the building sites, and in the pubs and see what they think? Most clubs, especially those hardly flushed with cash, would dream about a five-year ground deal worth around $1.5 million, and that’s before we start talking about the spin-off effects for the community and all the hard-working people in and around the club.” Yeah, what he said.

Leaving Australia, we tentatively enter The Twilight Zone… Just yesterday we joked that the pessimistic tone struck in our analysis of the Pwin merger documents was responsible for both Bwin and PartyGaming shares losing about 6% of their value over the following two days. We added another joke to the effect that, if our words had that level of influence, perhaps we should start short-selling all publicly traded gaming stocks. Har har, right? Then this morning’s Guardian published Dataexplorers figures showing that PartyGaming is one of the most shorted stocks on the FTSE, with 11.7% of its shares out on loan to hedge funds and speculators. On the plus side, now that we know for sure that we can manipulate the future, we can’t wait for tomorrow, when we anticipate Emma Watson coming round to clean our flat wearing nothing but that smile.