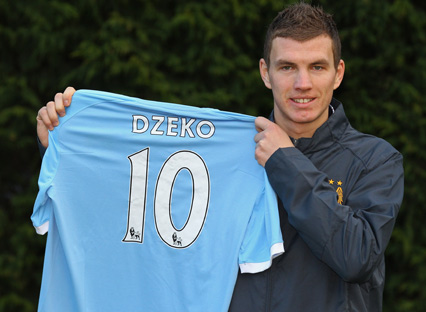 A lot can happen in a week and when it comes to soccer it can sometimes feel that a month has passed in the space of seven days. If it isn’t Tottenham and West Ham grappling over who gets the Olympic Park dustbowl stadium when its done then Steve Bruce is preaching loyalty on his “seven clubs in 12 years” pedestal.

After all the moaning and groaning of the week a full program of fixtures is in place this weekend and one will have two strikers battling it out for the trophy for best striker signed during the transfer window so far.

Darren Bent’s Aston Villa and Edin Dzeko’s Man City will be battling it out for a punnet of plums as THE signing of the window so far. The trophy, devised because Sunderland manager was annoying everyone by handing out sour grapes, has got the bookies chatting.

Charlie McCann, head of PR at StanJames, weighed in with his own opinion on the two of them and said: “We felt Bent was likely to play every game unless injured or suspended between now and the end of the season whereas we felt Dzeko would be used more sparingly at Eastlands. That is the only reason why Bent is preferred in the market.”

Lucky for anyone wanting to see who’ll be the plum is that the game is being broadcast live on TV, after which the trophy will be presented to the lucky winner in aisle 17 at the nearest branch of Asda.