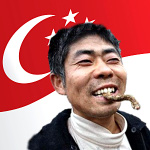 According to Singapore’s deputy finance minister, the region’s two recently opened integrated resorts (IRs) earned $324m for the government between April and November 2010. The Tote Board earned $130m from casino entry levies alone. But there is a cloud behind this silver lining, in that the opening of the Resorts World Sentosa and Marina Bay Sands casinos has led to “a restructuring of the gaming industry as a whole.”

Revenues from other forms of gambling – lotteries, horse and sports betting, fruit machines in clubs – are down. Nonetheless, Singapore is already capable of sending Las Vegas Sands stock to 52-week highs, and the Marina Bay property isn’t even fully open yet. PriceWaterhouseCoopers estimates Singapore’s casino revenues will double to $5.5b in 2011. Small wonder Time magazine calls the city-state the “hottest (little) economy in the world”.

Singapore also released stats to demonstrate to their citizenry that they’re keeping a close eye on the IRs and their efforts to combat problem gambling. Out of a population of 5m, some 31k Singapore residents (0.0062%) have been handed ‘exclusion orders’ barring them from entering the casinos. The overwhelming majority (88%) of these were discovered to be either receiving social assistance or undergoing bankruptcy proceedings (strict no-no’s).

Of the remaining group, 92% had voluntarily requested exclusion. The rest were banned at the request of family members. Of the 3,816 excluded who were identified as problem gamblers, 92% are Chinese, 78% are male and 60% are between 30-50 years old.

China isn’t the only country sending business Singapore’s way. Around 3k Malaysians arrive at the IRs every single day, dropping untold dollars in the process. All this money flowing out of the country has local politicians griping publicly about Singapore’s success, but what can they do? Malaysians love to gamble, but their government won’t let them. Even 58-year-old gambling grannies are getting locked up.

Malaysians also enjoy mobile gambling, although their definition of mobile may be different from yours. Police in Kota Kinaballu just ‘crippled’ a mobile gambling syndicate, arresting 20 locals (11 players, two guards and seven operators) on Sunday night for running an illegal Pai Gow operation. The syndicate was sort of like a traveling circus, driving around the country, setting up shop in one region for a while, hitting the road when the situation got a little too dicey, setting up shop somewhere else. Since you could probably rent tables locally, all you’d really need is a bankroll and some dominoes and you’re in business. It’s not an integrated resort, but beggars can’t be choosers. And the people of Malaysia are clearly begging for the right to gamble in their own land.