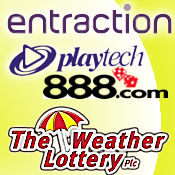 Swedish firm Entraction has struck a B2B deal with… somebody in China. In a cryptic statement, Entraction CEO Peter Åström stated that the platform provider’s first deal outside Europe would be to develop a standalone and locally-adapted version of its poker product with a new Chinese gaming network. This network is said to be a joint venture between a licensed Chinese firm and its European partner, both of whom at this stage prefer to remain nameless. So what the hell, let’s make something up, shall we? How about… Entraction has struck a deal to install poker software in the cockpits of China’s new stealth fighter, for which Entraction will receive two billion yuan worth of tainted milk products. There… That rumor ought to rescue Entraction’s sinking revenue figures.

Just weeks after Ladbrokes made what one industry analyst described as a ‘desperate gamble’ by offering £240m to acquire 888 Holdings, a new suitor for the flagging online entity has made his intentions known. According to Israeli financial daily Calcalist, software developers Playtech have entered the stage, professing their undying affection for 888, despite the old girl’s tits having sagged dramatically over the past year. Thing is, Playtech are reportedly offering £210m to acquire 888. While that’s demonstrably above 888’s market capitalization of £169m, did they not notice the £240m figure stated above? Does the phrase ‘a day late, £30m short’ spring to anyone’s mind?

Finally, The Weather Lottery, the UK’s leading lottery fundraiser, has decided to stop this mucking about and get properly stuck in to the online gaming world. Spurred by an 8% decline in revenues last year, the company has announced that it’s diversifying into poker, sportsbooks and online casinos. They’ve already taken a step toward the former, having paid £330k in November to acquire Devilfish Poker. As for future acquisitions, we suggest they wait a few more months, then issue a lowball offer for 888.com. By that point, the bidding should have dropped to the price of a pint and a pack of cigarettes.

Lads head turned by new beau. Will they be jilted once again?
Jamie Hinks
7 January 2013