Home / Sports / Bodog-sponsored Fulham getting back on track 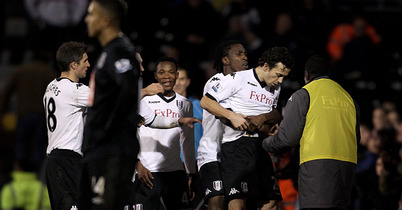 Soccer won’t be filling the sports news pages this morning unless John Terry and Wayne Rooney have teamed up to usurp Wayne Bridge’s new piece Frankie Sandford from The Saturdays. It’s unlikely then that the online sports betting sites took much of a hit after last night’s games, but there was a return to form for Bodog-sponsored Fulham.

Starting the game in the relegation zone, it looked rather bleak for the West London outfit. If you’re playing against Scott Carson there’s always a chance of monumental laughs to the detriment of the team he plays for. Last night was no exception.

Carson’s West Brom side were good for the first 44 minutes; that was before the former-England goalkeeper thought it was time to get to work. Simon Davies hit a hopeful effort from around 25 yards out which Carson flapped at as if it had been engulfed in a vat full of butter before it was hit. This opened up the floodgates as the home side added two more goals through Clint Dempsey and Brede Hangeland to put gloss on the scoreline at 3-0.

Man Utd was one of the other four sides in action, welcoming Stoke to the Theatre of Dreams. The result was never in doubt as Javier Hernandez and Nani scored United’s two goals, either side of a Dean Whitehead goal for the visitors, to stretch their lead at the top to three points with a game in hand over second placed City. William Hill now has the leaders at 10/11 to win the title, and 10/1 to remain unbeaten for the entire season.

Blackpool and Birmingham contested the night’s other game, Scott Dann scoring the winner late on to show the home side what the bottom half of the table looks like. It might be wise to get something on the Seasiders to be dropping out of the league at some point soon as the price won’t stay good for long, and if Ian Holloway goes elsewhere they could be back where many believe they belong next season.