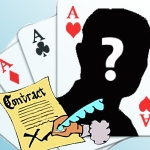 The blogger who first ‘outed’ Viktor Blom as Swedish poker phenom Isirdul1 appears to be claiming that Izzy has signed a sponsorship deal with an unidentified online poker site. Sohello “BankTheMan” Shah posted the following (In Swedish, so we’re relying on a translation):

“A famous Swedish high stakes player, according to my sources, has now made a sponsorship deal with a well known poker site. This news is not official yet, so unfortunately I cannot go out with his name or nickname. But the person is 20 years old, and during late 2009 and throughout 2010 he became poker’s biggest hot topic. Many have said that he is the world’s best HU player and that will soon take Ivey’s place.”

Assuming this report is true, it begs the question — will Isirdul1’s secret identity finally become public knowledge, or will he continue to operate under his online pseudonym? Is Izzy’s value to a poker room greater if he remains lurking in the shadows à la Batman, or if he comes out to play like Bruce Wayne?

In more definite poker signing news, tennis player James Blake has become the latest Friend of Full Tilt. The 115th ranked player in the world joins boxer Audley Harrison, who signed on with Full Tilt earlier this week. So that’s a boxer, a tennis player… Full Tilt is just a jai alai player away from cornering the sports market.