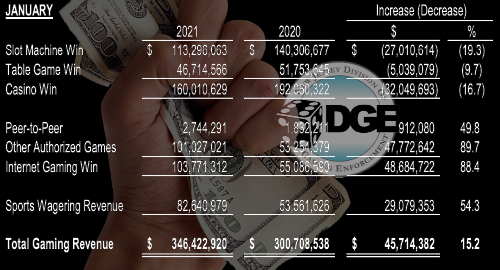 New Jersey’s online gambling market posted its first ever monthly revenue total over $100m in January, while basketball and the NFL playoffs pushed sports betting revenue to yet another record.

January’s records were (as always) primarily due to the online casino vertical, which shot up 89.7% year-on-year to $101m all on their own. Online poker contributed $2.75m, up by nearly one-half from January 2020. Both verticals undoubtedly benefited from cross-selling to sports bettors who enjoyed a full slate of marquee matchups last month.

Golden Nugget Online Gaming led January’s iGaming revenue pack with $31.2m (+47%) but the Borgata casino’s family of sites – which includes the BetMGM brand – wasn’t far back with $28.7m, which represented a stellar 176.8% year-on-year improvement. Around $926k of the Borg’s January total came via poker.

Resorts Digital Gaming – under whose banner one can find DraftKings and Flutter Ent’s FoxBet/PokerStars brands – ranked third with revenue of $22.8m, of which $843k came via poker. Caesars Interactive Entertainment was a distant fourth with $7.4m (+74.3%), although it won the poker month (as usual) with $975k.

Parlay wagers accounted for more than half ($43.6m) of January’s revenue on a 19.8% hold for the books. Basketball claimed the handle crown with $320.3m while roundball revenue ranked second with $15.35m. Football generated handle of nearly $201.8m and revenue of just under $12.6m.

An even more distant third-place went to Borgata/BetMGM with less than $8.5m, although that was more than double its January 2020 total. Ocean Casino Resort also doubled up to $4.5m while the formerly reliable William Hill/Monmouth Park track tandem reported effectively flat revenue of around $3.7m.