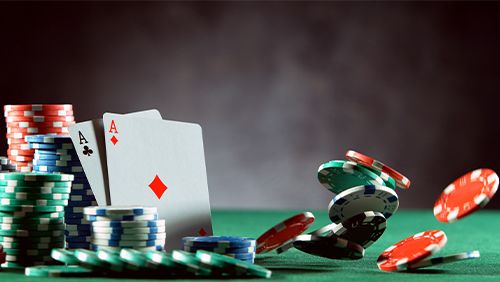 He went into the final near the bottom of the chipcounts, saw the second-least money invested in him (at odds of 14.87), yet Benjamin Rolle took down the latest and 34th edition of the GGPoker weekly $10,300 buy-in event, the Super MILLION$.

Winning $424,581, Rolle didn’t just come from a tough position, but he did it live on Twitch and as he described, with the best poker fans in the world.

The final table started as it went on, with plenty of action from the first hand. Despite that, it took 30 minutes for the first elimination of the evening, with Cypriot Aliaksei Bokia one of three players to hit an ace on a board showing A-3-K-5 until a decisive round of betting of the turn.

Boika had ace-ten, which was better than overnight chip leader Nick Petrangelo’s ace-six, but way behind Bert Stevens’ ace-king, which had hit top two pair on the flop. With close to 900,000 in the pot, both other players checked to Stevens, who made a half-pot bet which forced Petrangelo out of the reckoning. Boika, however, made the call and a ten on the river spelled doom. Again Boika checked, but this time called Stevens’ shove on the river and paid for it with virtually his tournament life, left with less than half a big blind which disappeared in the next hand.

Next to go was Andrey Novak, with the Ukrainian shoving from late position with ace-ten, called by Petrangelo in the next seat with pocket nines. Despite a Broadway gutshot opening on the turn, Petrangelo held to bump up his stack from some early losses, although it still left the American final table chip leader going into play behind Bert Stevens and Laurynas Levinskas.

It was time for Stevens to push for the win, and the man known as ‘girafganger7’ in the online poker world didn’t disappoint, busting ‘U LOSSER’ from India in the next hand with jacks against tens all-in pre-flop.

Suddenly a six-max table, it would be Austria-based ‘WatWudHaraldSDo’ who wud… ahem, would, bust next. Pocket tens were again the losing hand and it was Stevens who was remorseless in finding overpairs and holding with them, this time pocket kings putting the British-based player into the chip lead. However, while he had the chance of eliminating two players, Benjamin Rolle wasn’t going anwhere. All-in and committed for his tournament life with king-six of spades in the same hand, the board of 8-A-9-7-5 gave Rolle an astounding straight on the river to survive, and he trebled up back into contention.

Five players refused to lose one of their number for an incredible stretch, as over 90 minutes passed before the next elimination. When it came, it was a shock for any fans who had popped for a quick three-course meal as Bert Stevens was all-in and at risk with a suited ace-nine and up against the pocket jacks of Nick Petrangelo. Only a nine came on the river and the field was down to just four men.

With stacks so even and play still fairly deep (short-stacked Zhang having almost 24 big blinds), the next elimination could have easily taken some time, but it didn’t at all. Laurynas Levinskas lost a coinflip to Zhang in the very next hand, his ace-queen unable to hit against Zhang’s pocket fours after the latter shoved and Levinskas called. The two would clash again in the Lithuanian’s final hand when poicket threes couldn’t fade the river against Chang’s ace-ten, an ace on the river condemning Levinskas to defeat and a 4th-place cash worth $194,671.

Three-handed, Rolle was again the short-stack but it would be the overnight chip leader who left next. Left with scraps after a levelling war in a previous hand, Pentrangelo was all-in with queen-five, called by Zhang with ace-deuce for less than five big blinds. The flop of 3-7-5 put Pentrangelo ahead, but an ace on the turn flipped the script and a meaningless three on the river confirmed the overnight chip leader’s departure.

Heads-up, Zhang went into the action with a 3-to-1 chip lead, but that changed when Rolle won with ace-six against Zhang’s ace-deuce when a six hit both the flop and river and after grinding to parity, took the lead in a hand where Zhang called with a rivered bottom pair and Rolle had flopped middle pair. He held a lead of around 2-to-1 in the chips until he called with ace-six and set the trap for Zhang to shove with an off-suit queen-ten, Rolle calling it off with ease and holding after a board of K-8-AQ-K played out, the ‘slowroll’ option cruelly giving Zhang hope of a Broadway-completing jack, only for the crown to indicate defeat.

Here’s how the final nine finished in what was a highly entertaining final table to watch.

Want to watch all the final table action as it happened? Take a look at the official GGPoker YouTube channel replay of the four-hour broadcast.