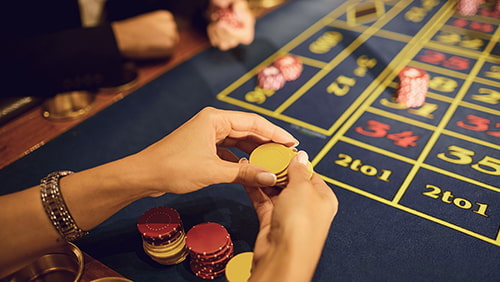 It’s almost business as usual for the Pearl River Resort’s sportsbook, nearby Philadelphia, Mississippi. After months of closure, the Mississippi Band of Choctaw Indians’ run casino is now humming along just as it did before Covid-19.

“When college football came back, followed by the NFL, we had everything going on, and that’s when everything started picking up for us,” Director of Sportsbook Chris Hopwood said. “All of the customers started coming back, and it became fun again.”

“Our location at Bok Homa was really busy, and here it slowly started coming back because we’re more of a transient, tourist place, so we get big crowds from Louisiana and Alabama,” added Hopwood. “We were a little slow to start with here, and if you watch our table games or slots, it’s still a little slow, because those customers haven’t quite come back, but for me, it’s been going full steam ahead.”

Employees have returned from furlough, customers are coming in, and it’s almost the same as it ever was. “It feels the same, except we have to wear masks now,” said employee Toni Eaves.

Hopwood noted that roughly half a million dollars has been spent to make the casino safe to visitors, including individual kiosks and a mobile app to reduce face to face interaction. There’s also everything we’ve come to expect in the age of social distancing: plastic barriers, hand wipes and hand sanitizing stations, along with temperature checks at the entrances.

“We’ve done almost everything we can as far as spacing goes,” Hopwood said. “It does make it a little tough for us because of the spacing in the Sportsbook — we did take some of the seating out — with the amount of customers we have, you’re trying to get them through as fast as possible so we’re not too congested.”

The Eastern Band of Cherokee Indians have voted down a protest over their recent purchase of Caesars Southern Indiana casino. By a vote of 56-44, the Tribal Council overruled a protest, which argued the deal wasn’t in the tribe’s favor.

Ho-Chunk Inc’s subsidiary, WarHorse Gaming, have given a visual tease of what their new casino will look like at the Lincoln Race Course in Nebraska. The $200 million expansion is expected to have a partial opening later this year, with a full opening in 2022.

“Although we’re still early in the process, it’s exciting to see the potential of a world-class gaming operation for the city of Lincoln and state of Nebraska,” Lance Morgan, president and CEO of Ho-Chunk, said in the release. “Our goal is to build a top-notch facility that compliments horse racing while at the same time offering a resort style casino/hotel on the property.”

Finally, as we reported last week, it looks like Arizona is joining the sports betting bandwagon. Governor Doug Docey wants to work out a new compact with the tribes, and help save the state’s budget.