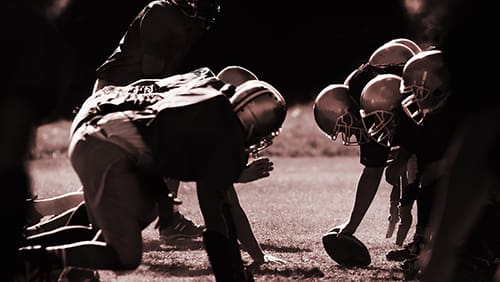 It’s East vs. West, North vs. South for the NFL Conference games. The Divisional Round games wrapped up this weekend, giving football fans plenty of excitement and sports gamblers plenty of action. Not everything worked out as planned, but there are now just four teams remaining. The Conference Championship games will be held this coming weekend, the last hurdle between an unusual NFL season and a Super Bowl title.

The NFC North’s leaders, the Green Bay Packers, have the opportunity to give quarterback Aaron Rodgers something he has yet to accomplish. For the 16 years he has been with the team (the only NFL team of which he’s been a part), he has never been able to play an NFC Championship game at Lambeau Field. That will change this coming weekend after the Packers beat the LA Rams in decisive fashion this past Saturday.

The Packers came out swinging and never relented until the final seconds dissolved on the clock. They won without much work, taking the 32-18 victory that saw Rodgers throw for a touchdown and also run one in on his own. Through three quarters, the Packers scored on five straight drives, and the fourth quarter became a lesson on clock management.

The Buffalo Bills were first in the AFC East and, for the first time in almost three decades, are going to the AFC Championship Game. They leaped over the Baltimore Ravens this past Saturday to get to where they are in a game that was about as lopsided as they come. The Ravens were 11-5 going in; the Bills were 11-3. However, nothing went right for the Ravens, who ended the day with just three points in a 17-3 loss.

This was expected to be a much better game – oddsmakers gave it an Over/Under of 50. The Ravens’ offense could never get organized and the Bills’ defense proved to be too much. An attempted third-quarter rally by Baltimore ended in disgrace when quarterback Lamar Jackson, after having led his team into the red zone, tossed an interception that turned into a 101-yard pick-six. At that point, it was apparent that the Ravens were ready to check out of the game.

The Kansas City Chiefs weren’t just the first-ranked team in the AFC West, they were the first-ranked in the NFL and want to show that winning the Super Bowl last year wasn’t a fluke. They found that advancing to the AFC Conference Game wasn’t going to be that easy, with the Cleveland Browns giving them more difficulty than imagined. They pulled it off, though, but the Browns should be proud of their efforts.

The Chiefs were given -500 before the game – the Browns were looking at +375. However, the final score of 22-17 shows exactly how tough the Browns played. Kansas City lost quarterback Patrick Mahomes in the third quarter to injury, but Chad Henne was able to keep the Chiefs from faltering. An overpowering defense did its work in the fourth quarter to keep the Browns away from the end zone, and the Chiefs are one step closer to their second Super Bowl appearance.

The NFC South produced two teams that would face off in the Divisional Round, with both expecting to put on a show – they didn’t disappoint. The New Orleans Saints and the Tampa Bay Buccaneers fought hard from the beginning of their matchup and continued to give each other problems throughout the game – until the fourth quarter.

The Bucs were able to capture the 30-20 victory, in part, because of the three interceptions Saints quarterback Drew Brees threw during the game. Still, the Saints were down by only three points in the fourth quarter and this one looked like it would go the distance. However, one of those INTs on the day for Brees would be found halfway through the fourth, and the Bucs capitalized on it in a big way. Still, it wasn’t all bad for the Brees name, as Brady threw a touchdown pass to Brees’ son as the two veteran quarterbacks were chatting it up on the field after the game.