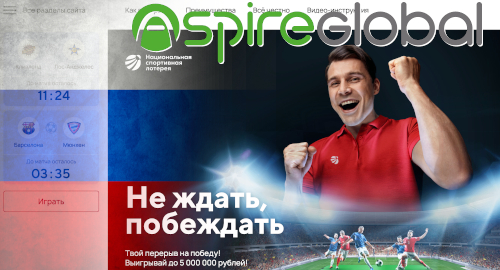 On Thursday, the Stockholm-listed Aspire Global announced that it had reached a deal to provide online and land-based lottery games for Russian National Lottery operator Sports Lotteries LLC. The deal involves Aspire’s BetoBET online sports betting platform, which will provide both gaming content and its Player Account Management module platform.

Aspire will provide Sports Lotteries with 10 instant lottery products for retail operations plus five draw-based products for both online and retail. The deal is for a three-year initial term with options for an extension of unspecified length.

The Moscow-based Sports Lotteries – a partnership of Russian betting giant Liga Stavok and the Boxing Federation of Russia – is one of only two companies licensed to offer online lottery products in Russia, the other being Stoloto. Sportslottery.ru launched in June after receiving its Russian license in August 2019.

Aspire Global CEO Tsachi Maimon noted that Russian lottery sales totaled around €1b last year and his company aspired to “contribute in a significant way to the industry’s exponential growth.”

Lotteries may be poised for growth but Russia’s sports betting industry is currently in turmoil over recent proposals to significantly hike taxes and dissolve the two rival bookmakers industry groups (SROs), along with their respective digital payment hubs in favor of a single payment channel overseen by a ‘unified’ gambling regulator.

The plan to impose steeper taxes is intended to benefit Russian sports organizations, which currently get a cut of all wagers taken on their respective matches. But the new tax plan extends to international sports events, and the money is slated to go to the Ministry of Finance, after which some portion may or may not trickle down to local sports.

Darina Denisova, president of the Bookmakers Self-Regulatory Organization, noted this week that suggestions to eliminate the SROs was first voiced by in June by the Boxing Federation – the same folks behind Sports Lotteries – and was “harshly criticized by the entire betting community.”

Regardless of whether the Federation believes it’s being shortchanged by the current betting tax regime, it certainly appears that a war is brewing between bookmakers and boxing luminaries. But since the latter appear to have the ear of key government figures, there’s really only one guess as to who will win this round.