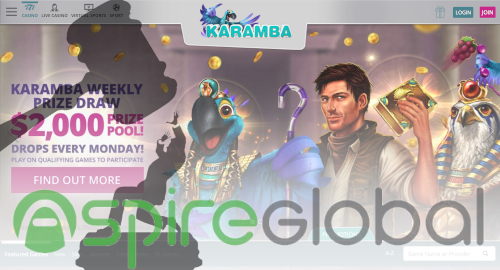 UPDATE: The original article stated that Aspire Global had been fined SEK3m. The fine issued against Aspire Global by the Patent & Market Court is conditional, meaning it will only be imposed should the company fail to comply with bonus/marketing rules in future.

About one year ago, Sweden’s Consumer Ombudsman (KO) launched a lawsuit against Aspire Global subsidiary AG Communications, which holds a license issued by Sweden’s Spelinspektionen regulatory body for, among other domains, Karamba.com.

The KO took exception to a Karamba bonus offer that, in the watchdog’s opinion, contained excessive rollover requirements that weren’t adequately detailed in the marketing pitch. Sweden’s gambling regulations require operators to observe ‘moderation’ in their promotional material, although licensees have complained about the vagueness of this requirement.

Aspire Global disagreed with the KO’s read of the situation but the Court found that the offer was incompatible with the moderation requirement, in part because “essential information, such as wagering requirements, has not been clear and unambiguous.”

Specifically, the Court claimed that “the construction of the bonus offer makes it very difficult for the consumer to understand the meaning of it.” The Court found that “none of the conditions and rules that apply” to the bonus offers were “clearly stated in the marketing.” In fact, two of the third-party sites on which the offer appeared didn’t specify any conditions whatsoever.

Furthermore, the Court found fault with the “far-reaching demands” to realize the promise of the bonus offer, and the lack of explanation of these demands means “the consumer is likely to make a business decision he otherwise would not have made.”

In addition to prohibiting AG from running the Karamba offer in future, the Court also imposed a conditional fine of SEK3m (US$344k). Aspire was previously penalized SEK500k for marketing violations in June 2019, while the company was also fined SEK3m in April 2019 for failing to block self-excluded gamblers from betting.

The ruling came one day before Aspire released its Q3 financial report card, which showed revenue rising 20.7% year-on-year to €40.1m in the three months ending September 30, while earnings rose more than one-quarter to €6.6m.

Last year’s acquisition of the Pariplay game studio and aggregator is proving a savvy investment, as the unit’s revenues and earnings were up 69.3% and 73%, respectively, from Q3 2019.