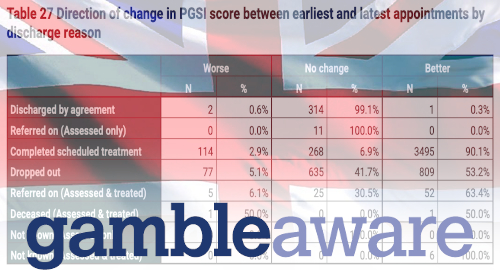 Problem gambling treatment programs in the UK have enabled 60% of gamblers to shed their ‘problem’ designation by the end of treatment.

A new report by the UK’s industry-funded GambleAware charity showed the effects on over 9k individuals who made use of the new National Gambling Treatment Service (NGTS), a network of organizations set up last year to offer confidential treatment and support for individuals suffering from gambling harm.

Of the clients who completed treatment between April 2019 and March 2020, 90% showed improvement on the Problem Gambling Severity Index (PGSI) scale. Even better, of the individuals who qualified as problem gamblers under the PGSI, 60% no longer qualified for that designation by the end of treatment, which averaged around eight weeks in duration.

The trick is getting these individuals into treatment, as 90.2% of referrals were self-made. That means individuals have had to acknowledge that they have a problem before getting help.

The good news is that those who do seek treatment tend to see it through to the end. In 2019/20, 69% of those in treatment completed their course, up 10 points from 2015/16. Over the same period, the number of those who dropped out of treatment fell 11 points to 24%.

The 9k individuals treated through the NGTS were overwhelmingly male (75%) with a white ethnic background (89%) and an average age of 34 years. That’s a problem, as surveys show a growing segment of female problem gamblers coming from a black, Asian or minority ethnic (BAME) background.

Online gambling was the primary access point for 58.3% of study participants, although some 68.8% of participants had gambled online at some point. Bookmakers ranked second (27.1%) as the primary gambling location, while casinos were a very distant third (4.7%).

Most (71%) of the subjects who entered treatment had gambling debts, with 45% owing over £5k and 16% owing between £20k-£100k. The average gambling expenditure in the 30 days prior to seeking treatment was £2,102. While three-quarters of gamblers were employed, 12% had suffered a job loss as a result of their activity.

GambleAware CEO Marc Etches called the report “a significant milestone” toward understanding the role the NGTS can play in assisting the UK’s problem gamblers.