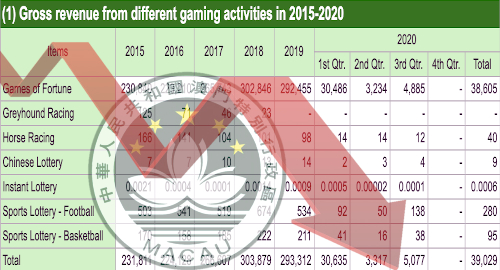 The VIP baccarat segment accounted for MOP2.34b (48%) of Q3’s total, a fraction of the same period last year but up 51% sequentially. VIP’s share of the overall pie increased slightly from Q2 but nonetheless took a back seat to mass market gaming for the seventh straight quarter.

Mass market gaming (including slots) gained MOP1b sequentially to MOP2.5b, driven by a 77% gain in mass baccarat revenue (MOP1.9b). Interestingly, slot revenue fell 13% from Q2 to MOP375m despite the market adding 649 machines to its total in a bid to tempt electronic gambling fans.

About the only real cause for celebration in the Q3 results was Macau Slot’s sports lottery, which reported football betting revenue nearly tripling from Q2 to MOP138m. The return of European major league play caused football turnover to rise from MOP498m in Q2 to MOP1.43b in Q3. Basketball betting enjoyed a smaller but similarly dramatic revenue surge (MOP16m to MOP38m).

Macau’s gaming market has posted six straight months of annual declines of at least 90% and the recent Golden Week holiday has failed to deliver the traditional surge of mainland gamblers. Sanford C. Bernstein analysts estimated that average daily gambling revenue was down 76% from last year’s holiday period, despite Beijing approving the resumption of travel from Guangdong province in late-September.