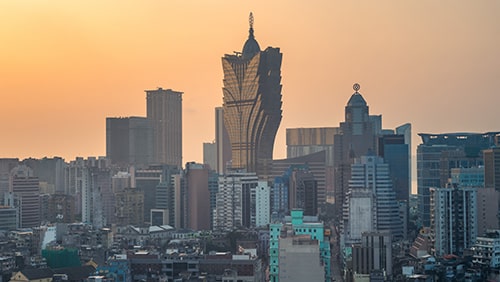 It looked like this year’s Golden Week holiday period wouldn’t provide any relief to the city when, across the first three days, visitation was 90% lower than what was seen last year. Any chance of that improving as the week progressed was tossed out the window, with the latest figures showing the city remaining relatively tourist-free compared to what should have been seen. Because of the unprecedented fallout caused by COVID-19 and the drop in visitor arrivals, Golden Week has seen Macau’s casinos report that their gross gaming revenue (GGR) remains almost at a standstill.

According to the latest figures from Macau’s Public Security Police, Macau saw 139,280 visitor arrivals across the first seven days of October, coinciding with the Golden Week period. Of these, 130,000 came from mainland China, representing a drop of 83.6% from a year earlier. On October 7, the penultimate day of the period, only 19,100 arrivals were tallied, 75.3% fewer than the same day in the 2019 Golden Week celebration.

As a result of the decline in traffic, Macau casinos are still unable to launch a major rebound following the chaos caused by COVID-19. According to a report by the Sanford C. Bernstein brokerage released yesterday, GGR across Golden Week in Macau only gave the casinos around $246 million, 76% less than what had been recorded last year. About the only good take away is that the daily average rate is up 279% month over month.

The analysts, Vitaly Umansky, Tianjiao Yu and Kelsey Zhu, asserted, “At this stage, we estimate [full] October to see a [GGR] decline of maybe 70 percent. This is largely tied to visa processing and visitation and severity of any liquidity constraints which remain largely uncertain.” They added that things could start to improve over the next couple of months, explaining, “The key will be the simplification of the visa process (currently taking up to two weeks to process), and perhaps elimination of the Covid-19 test requirement.”

Seeing the lack of recover during Golden Week and combining this with the absence of any real gambling action in almost all of 2020, many analysts are predicting a long road to recovery for Macau. JP Morgan Securities (Asia Pacific) Ltd. has weighed in on the subject, reiterating previous forecasts that indicate a full recovery is most likely not possible until at least 2022. Between obstacles in acquiring visas and a great amount of trepidation regarding travel on the part of would-be gamblers, Macau is going to have to weather the storm a little longer.

The firm added, “We were overly hopeful on the prospect of pent-up demand, which we thought would outweigh the nuisances related to travel arrangement to Macau and stricter capital control. A broadening clampdown on illegal/overseas gambling in China is creating jitters among agents/players at unprecedented levels, in turn throttling any VIP/high-end demand recovery (which, by the way, was touted and supposed to lead the initial rebound).”