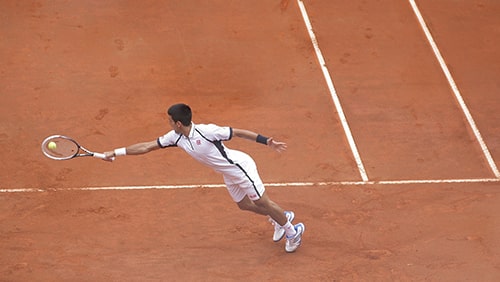 With just a week to go at Roland Garros, there has been a change in the betting markets to win the Men’s Singles at the French Open, and it’s an important one.

Spanish player Rafael Nadal has redefined success at the venue, where he has won a spectacular 12 of his 19 Grand Slam titles. Yet despite clay being his favourite surface and Roland Garros being by far his most successful venue, Rafael Nadal is no longer the outright favourite to take the title.

That’s partly down to Djokovic’s imperious form at Roland Garros, not a location he’s enjoyed success at through the years solely because of his nemesis Nadal. We say that, but as we explained last week, the Serbian actually leads the head-to-head 29-26.

Having just reached the quarter-finals for what is a record 11th time by smashing talented Russian 15th seed Karen Khachanov 6-4, 6-3, 6-3, Djokovic has come into 11/8 to be crowned champ in a week’s time – presumably at the Spaniard’s expense. With ‘Djoko’ facing either Spanish pro Pablo Carreno Busta or German qualifier Daniel Altmaier in the quarters, the smart money may be on the man ejected from the U.S. Open for striking a line judge with a tennis ball at Flushing Meadow. Oddly, that happened again during the Serbian’s win against Khachanov, but it was accidental and there was – unlike the Adria Cup – no harm done.

Greek 5th seed Stefanos Tsitsipas reached his first Roland Garros quarter-final by beating Bulgarian player Grigor Dimitrov 6-7 (4-7,) 7-5, 6-4, 7-6 (7-3) and will face Andrey Rublev next, a player who could be even tougher given he beat the Greek ATP Finals winner in Hamburg just a few weeks ago.

“The tie-break was where all the money went,” said Tsitsipas after the game. “I tried to take it point by point [and] I showed a lot of discipline. My aggressiveness on return games and my focus on important points made the difference.”

Others still involved include U.S. Open champion Dominic Thiem (6/1) and Diego Schwartzman, who we suggested would be one to watch in this event a month ago and is somehow still available at 33/1.