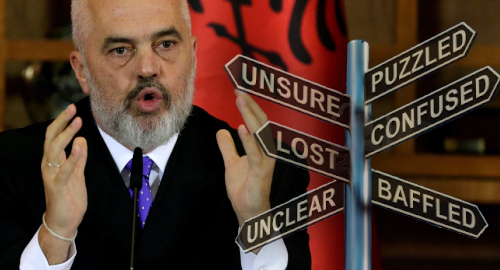 Albania’s proposal to license casinos in the nation’s capital may turn out to have been a mirage, or just another example of political cronyism run amok.

Last week, the Albanian Gambling Supervision Authority officially announced a tender for the right to operate casinos in a designated area in the heart of the capital Tirana. Interested operators were told to ensure their submissions were received by October 22.

The notice remains posted on the Authority’s website but local media outlet Exit reported Wednesday that Prime Minister Edi Rama was denying that his government had any intention of reversing the anti-gambling policy of recent years. Rama said Wednesday that there was no “reopening of gambling in Albania” and “no casino license.”

Rama (pictured) attempted to clarify that “a specific procedure has been created which is related to the expiration of the license of the only casino operating in Tirana.” That’s a reference to Adria Entertainment (formerly known as Apex-al), which runs a gaming floor at Tirana’s Regency Hotel featuring around 240 slots and 20 gaming tables.

Exit previously reported that the Adria was issued a new 10-year gaming license in May, but local media outlet Pamfleti reported Wednesday that Adria’s Regency license was set to expire on October 1 and that a request to extend this license by three months had been rejected by the government.

Rama’s Wednesday statement appears to suggest that the Regency license is the only one up for grabs. However, Pamfleti quoted Finance Minister Anila Denaj suggesting last week that there would be five additional casinos permitted in Tirana, and these would effectively be satellite operations of the main casino licensee.

Further muddying the waters, as of August 1, there’s been a Grand Casino Tirana operating out of the Maritim Hotel Plaza Tirana. The license was reportedly issued three months ago, without a public tender, allegedly due to the fact that the prime minister and his brother Olsi Rama are the Grand Casino’s owners.

Bottom line, Albania’s gambling market is a riddle wrapped in a mystery inside an enigma, then dumped under a huge sign at the border reading ‘stay away if you know what’s good for you.’