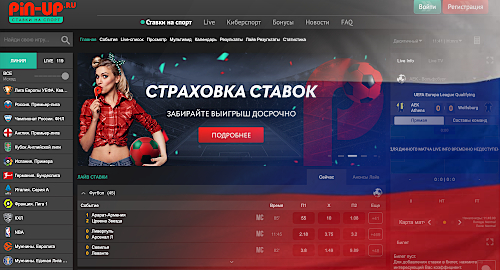 On Thursday, Russia welcomed its 21st licensed online bookmaker, Pin-Up.ru, which is currently offering wagers on both real-world major league activity and the eSports variety. The site is a member of the Bookmakers Self-Regulatory Organization (SRO), all of whose members use the Qiwi processor to handle payments for their customers.

Pin-Up.ru is operated by Moscow-based William Hill LLC, which was issued a Russian betting license way back in 2014. This Hills was set up in the expectation of some kind of joint venture partnership with the UK bookmaker of the same name, but nothing ever came of these plans and the Russian firm has finally decided to go it alone.

Russia recently approved legislation modifying the rules for local betting operators, which took effect on September 30. Among the new rules is a requirement for all holders of ‘dormant’ betting licenses to either launch a functioning business within six months or surrender the license, so here we are.

The Pin-Up brand has actually been conducting online gambling operations since 2016, but only outside Russia. These other Pin-Up sites also offer online casino products, which are forbidden under Russian law. Russia’s telecom watchdog Roskomnadzor currently features 858 Pin-Up associated domains on its online gambling blacklist.

A Pin-Up spokesperson said the company planned to spend up to RUB1b (US$12.9m) on marketing over the next two years, with the goal of capturing 7% of Russia’s online betting market. The site has already signed Russian national footballer Artem Dzyuba as its first brand ambassador.

Sharp-eyed readers will recall that Bwin.ru, an actual international joint venture involving UK-listed GVC Holdings, had a sugar daddy that promised to spend up to €10m per year promoting the new brand. But the money never showed, and Bwin.ru was ultimately punted to new owners, who have so far failed to boost the site’s minimal Russian profile.

SimilarWeb data showed Bwin.ru ranked third from the bottom in site traffic in August with less than 100k visits. At the other end of the scale, market-leader Fonbet reported 9.44m visits, more than twice the score of closest competitors Winline (4.18m) and Liga Stavok (3.3m).

This is a truly unfortunate time to be launching a new bookmaker, as Russia’s new betting rules severely limit markets on which punters can wager. Interpretations of the law vary, but betting on non-sports events is definitely off the table.

Complicating matters is the requirement for bookmakers to kick back 5% of their betting revenue to the sports bodies on which those wagers are placed. The intention was to benefit Russian sport, but confusion reigns over what to do with revenue derived from international sports wagers and the Ministry of Sport is reportedly not offering much in the way of guidance.

Worse, the new rules state that failure to remit the required 5% could result in the suspension or cancellation of betting licenses. Just to be safe, some Russian-licensed bookmakers, including 1xBet and MostBet, suspended bets on international sports matches this week ahead of Thursday’s deadline.