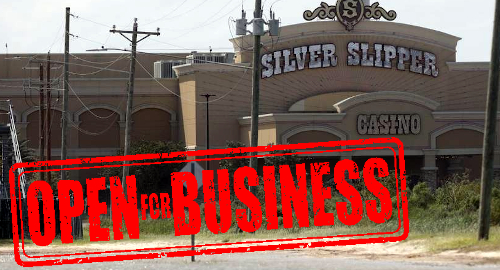 Mississippi’s Gulf Coast casinos have been cleared to reopen after Hurricane Sally blew through town, while August’s gambling revenue took a hit from other ferocious females.

On Wednesday, the Mississippi Gaming Commission (MGC) announced that the 12 Gulf Coast casinos that were ordered to close on Monday could restart gaming operations as of 1pm. The MGC said that since Hurricane Sally had made landfall east of the state, the danger to customers had passed.

Not all casinos escaped unscathed, as the Palace Casino Resort in Biloxi reported flooding in its parking deck. But that was a better fate than that suffered by two dormant riverboat casinos in Bayou La Batre, Alabama, which floated free from their moorings on Tuesday as Sally bore down on the region.

The region’s seasonal influx of inclement weather is reflected in the MGC’s latest revenue figures for August, which showed its 26 commercial casinos generated combined revenue of $179.4m, nearly $7.5m better than August 2019 but a significant reduction from July’s $195m.

All three casino regions reported month-to-month declines, with the Coastal region taking the biggest hit, falling $9.5m from July to $106.3m last month. For the year-to-date, statewide revenue stands at $1.08b, down from $1.47b in the first eight months of 2019. Mississippi casinos shut down in March due to Hurricane Covid, remained closed for the entire month of April and didn’t reopen until mid-May.