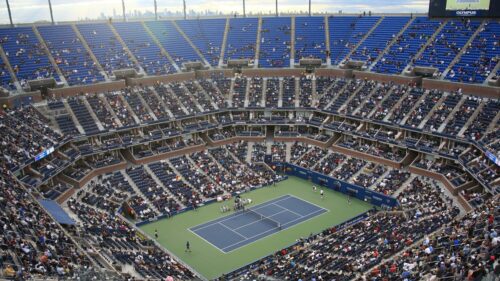 World No.1 Novak Djokovic has been sensationally disqualified from the U.S. Open after unintentionally striking a lineswoman in his fourth-round match against Pablo Carreño Busta. Djokovic unintentionally struck the lineswoman in the throat when he discarded a ball behind him. The official fell to the ground in pain and was immediately assisted by Djokovic and tournament officials.

After apologising, Djokovic was in deep discussion with umpire Aurelie Tourte and tournament referee Soeren Friemel. Under the ATP guidelines, the 17-time major title winner was defaulted from the tournament.

Top-seeded Novak Djokovic was defaulted from his fourth-round match at the #USOpen after he accidentally hit a line judge with a tennis ball Sunday. pic.twitter.com/TTstxZB2Jw

Friemel did not think that Djokovic intentionally meant to hit the official but had little option but to disqualify the top seed. “Based on the fact that the ball was hit angrily, recklessly, that it went straight at the line umpire’s throat”, Friemel said.

“While there was no intent – the result of hitting a line umpire and her being hurt is the essential factor in the decision-making process here,” he added.

U.S. Open tournament organisers released a statement after the incident:

“In accordance with the Grand Slam rulebook, following his actions of intentionally hitting a ball dangerously or recklessly within the court or hitting a ball with negligent disregard of the consequences, the U.S. Open tournament referee defaulted Novak Djokovic from the 2020 U.S. Open.

“Because he was defaulted, Djokovic will lose all ranking points earned at the U.S. Open and will be fined the prize money won at the tournament in addition to any or all fines levied with respect to the offending incident.”

In the absence of Rafael Nadal and Roger Federer, Djokovic was the overwhelming favourite to claim the title. The Serb becomes the first player since in three years to be disqualified for striking an official. Canadian Denis Shapovalov was disqualified from a Davis Cup match against Britain for the same accidental offence.

Djokovic left Flushing Meadows without attending the mandatory press conference, instead choosing to release a statement on Instagram apologising for his actions.

This whole situation has left me really sad and empty. I checked on the lines person and the tournament told me that thank God she is feeling ok. I‘m extremely sorry to have caused her such stress. So unintended. So… https://t.co/UL4hWEirWL

“I apologise to the U.S. Open tournament and everyone associated for my behaviour. I’m very grateful to my team and family for being my rock support, and my fans for always being there with me. Thank you and I’m so sorry.”

The loss of Djokovic has thrown opened up the draw. The U.S. Open winner is guaranteed to be a first-time major winner.