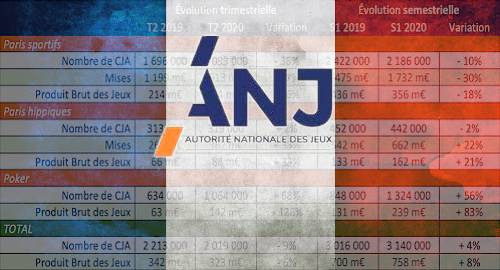 Like most other gambling markets, France’s sports betting revenue took a major hit following the pandemic-related suspension of major league activity early in Q2. Betting revenue was down 56% to €94m as wagering turnover slid 57% to €513m and active bettors fell by more than one-third to just under 1.1m.

Like a number of other markets, French bettors turned their attention to Belarusian football, which continued to play despite the pandemic. This boosted football’s share of overall betting turnover to 87% (€445.4m), up from an average 55-60% in previous quarters.

South Korean baseball also maintained its activity during Q2, which pushed baseball into a rare second place with turnover of €36m, while basketball managed only half that sum and rugby union – largely Australia’s National Rugby League – leaped into fourth place with €9.8m. All other sports combined accounted for only 1% of Q2’s turnover.

But with sports resuming activity throughout the second half of Q2, the ANJ said the betting market had largely recovered by the final week of June, during which turnover reached “a level slightly above” the comparable week in June 2019.

Online poker benefited enormously from the sports halt, as poker revenue shot up 126% to €142m, the largest gain in the decade-plus of France’s regulated market, as weekly active players rose 68% to 1.06m. Cash game revenue improved 82% to €39m while tournaments leaped 149% to €103m.

That’s also a significant improvement over the overall poker revenue tally of €98m in Q1. French-licensed poker sites did their best to salt the mine, boosting Q2 bonus offers to players by 88% year-on-year to €26m. Poker accounted for 44% of overall Q2 revenue, up from just 20% in Q2 2019.

Poker’s gains were most evident during the initial pandemic lockdown period of Q2, with poker stakes spiking 222% in the week of April 13-19. The gains slowed as the lockdown eased, although ANJ says poker revenue was still up 50% year-on-year during Q2’s final week.

Finally, horseracing betting stakes rose 35% year-on-year to a record €362m in Q2, while racing revenue gained one-third to €88m. Both figures represent gains not seen since the regulated market’s launch in 2010.

French racing was suspended in early May but the ANJ’s predecessor ARJEL quickly approved wagering on a number of overseas racing markets. The revenue gains were all the more impressive given that active race betting accounts rose by only 2% year-on-year during Q2.