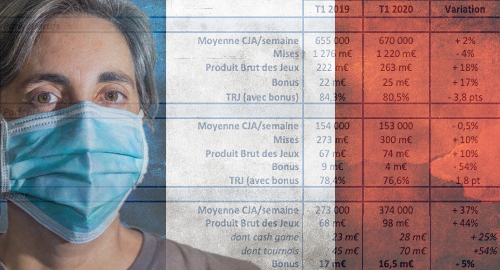 France’s online poker market enjoyed a serious surge in the first quarter of 2020, although it’s unclear how long the pandemic-influenced gains will last.

The gains came despite sports betting turnover falling 4% year-on-year to €1.22b, the regulated market’s first wagering decline in nine years. The COVID-19 cancellation of major sports events in March pushed that month’s turnover down 40%, spoiling what had been an 11% turnover rise over the first two months of 2020.

Despite the turnover decline, favorable (for the bookies, anyway) sports results resulted in betting revenue rising 18% year-on-year to a record €263m. The results would have been much higher were it not for COVID-19, as revenue was up a staggering 48% by the end of February.

Online poker was also in record-setting mode as revenue spiked 44% year-on-year to €98m, thanks to weekly active player ranks growing 37% to 374k. Cash game poker revenue improved 25% to €28m while tournament revenue soared 54% to €70m. The gains were all the more impressive given that bonus offers dipped 5% during the quarter.

Q2’s figures will likely show an even larger rise in online poker activity, at least, through the initial months. However, poker traffic across European regulated markets plateaued after the first four weeks of pandemic lockdowns and began to decline thereafter, partly due to the resumption of sports events and the reopening of land-based gaming options.

Horseracing reported 10% rises in both turnover (€300m) and revenue (€74m) despite the mid-March halting of racing meets and the ranks of active bettors falling 1k to 153k. The turnover figure is the highest in seven years while the revenue total represents a new record in the regulated market’s 10-year history.