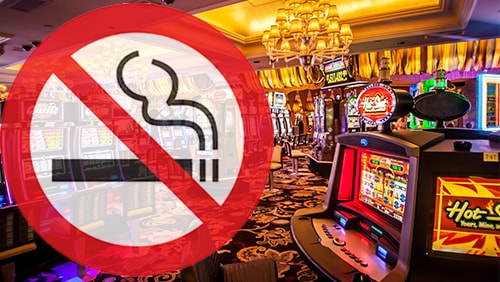 Pennsylvania lawmakers have heard the call, and a new bill seeks to ban smoking in state casinos. Rep. Dan Frankel has put forward a bill that would amend the Clean Indoor Air Act of Pennsylvania, specifically to close loopholes that allow operators to permit smoking in their premises.

House Bill 2298 would better define the previous law, providing specific requirements for gambling floors, but also bars, nightclubs, and other businesses. Casinos would initially be required to have 75% of their gaming floor be smoke free, and could then appeal to adjust that requirement if their revenue in the smoking area is disproportionately higher than their non-smoking area.

With the Covid-19 pandemic making masks almost a requirement for going out in public, removing a mask to have a drag presents an obvious public health risk. But smoking itself is a public health risk, and creating a permanent ban on public smoking makes some sense. During a virtual meeting with the Breathe Free Pennsylvania Coalition, Frankel said:

“Exposure to second-hand smoke kills approximately 41,000 non-smokers in the U.S. every single year. It made sense before the Pandemic, but the idea of rolling back these protections once they’ve already been put in place is absolutely inconceivable.”

One attendee expressed her support for the bill. “I’ve had people blow smoke in my face while I’m writing up a jackpot,” she said. “I don’t think we should have to suffer for what other people choose to do with their lives.”

Frankel noted that the PA Senate is considering a similar bill.

The bill comes at a perfect time, as a recent poll showed a majority of potential Las Vegas tourists no longer want to deal with smoking when they visit the casino. 72% of respondents indicated that they prefer smoking either be banned or restricted in some way, and those who refused to visit a casino where smoking was permitted balanced out perfectly with those who would only visit a casino if they could smoke.