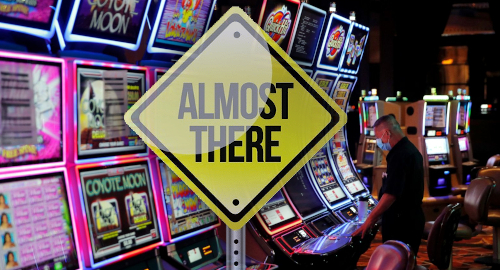 Nevada casino gaming revenue staged a minor comeback in July, although capacity restrictions kept a lid on operators’ ability to rebound from their long COVID closure.

Figures released Wednesday by the Nevada Gaming Control Board show the state’s gaming licensees generated revenue of $756.8m in July, a 26.2% decline from July 2019 but significantly better than June 2020’s $566.8m.

Nevada casinos were ordered to close in mid-March as the pandemic took hold and didn’t reopen until June 4 and even then only at 50% of capacity. Since then, the state’s casinos have been linked to pandemic outbreaks in other states and Nevada Gov. Steve Sisolak has so far resisted calls to shut the casinos for a second time but is under mounting pressure to publicly name and shame operators who are failing to observe required health and safety protocols.

All other betting categories were in negative territory, in part due to bettors being unable to cash their winning tickets until they returned to Vegas. Football caused a net loss of nearly $3.4m, while hockey (-$109k), basketball (-$26k) and parlay cards (-$20k) acted as lesser anchors. On the flip side, the state’s racing books were up 2.2% year-on-year to $3.1m.

The state’s mobile betting apps accounted for $5.8m of July’s revenue, leaving only $600k coming via retail books (which had the responsibility of cashing those overdue physical winning tickets). Total handle hit $163.6m, of which 69% came via mobile devices. Nearly half of July’s handle came via the ‘other’ category, although that dominance is expected to end now that baseball, basketball and hockey are all back in action.