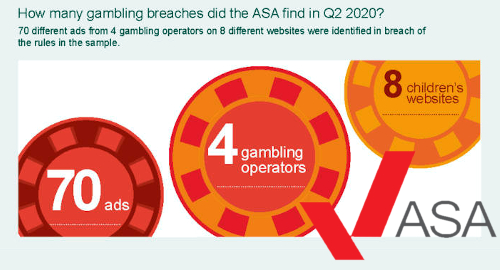 On Wednesday, the Advertising Standards Authority (ASA) issued its latest report on age-restricted advertising that somehow eludes the censors and finds its way onto websites that attract an audience with “a disproportionately high” number of children — defined as over one-quarter of the audience — which is a violation of the UK’s Advertising Code.

The ASA found 159 examples of age-restricted ads in violation of the Code, of which 70 ads involved gambling. These adds were run by only four gambling operators and appeared on eight different websites.

Only the HFSS category scored higher, with 78 different ads from 29 advertisers on 24 websites and five YouTube channels. Even worse for gambling was the fact that the majority of these HFSS ads were promoting products such as butter, nuts, seeds and cooking sauces, which aren’t exactly Doritos and Red Bull, making these only technical violations of the Code.

As for the other categories, one particularly daft alcohol brand ran 10 different ads on a single website, while only one e-cigarette ad made the cut. All of which makes the gambling offenders look even more dodgy.

The guilty gambling operators weren’t identified by name, nor was it clear that these operators were UK Gambling Commission licensees. The ASA said it followed up its study by contacting each offending company to ensure the ads were removed and to issue warnings that future transgressions won’t be tolerated.

The ASA’s report was subtitled ‘building a zero-tolerance culture to age-restricted ads in children’s media,’ and CEO Guy Parker said the regulator expects “advertisers and the parties they contract with to use the sophisticated tools available to them to target their ads responsibly.” The online study will be repeated quarterly.

For a bit of perspective, it’s worth remembering that the ASA’s own research from earlier this year says that kids are now viewing fewer gambling ads on television that at any time in the 12 years that the regulator has been monitoring the airwaves.