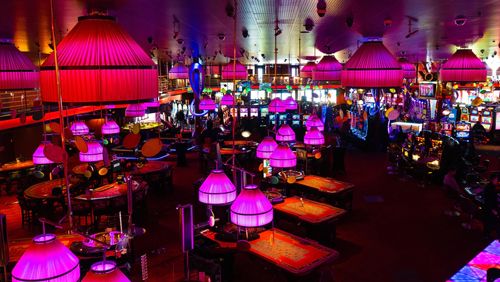 Casino revenue reports continue to flood in and show just how much pent up demand there is in the U.S. for gambling. Ohio is happy to report one of their best months ever, while Pennsylvania is figuring out just how much revenue they lost from pandemic shutdowns.

With a pent-up demand for entertainment, and Detroit not yet reopening their casinos, Franks said there were plenty of visitor’s to Ohio’s gaming locations. “I also think there are limited opportunities for folks to spend their entertainment dollars,” Franks said.

The Hollywood Gaming at Dayton Raceway Racino did very respectably with a net win of $11,174,864. “Business has been a pleasant surprise in the month-and-a-half since reopening,” Tosh Anderson, spokesperson for the casino said. “We saw a good spike at the beginning based on pent-up demand, but have not seen that spike decrease as much as we expected.”

The record month is more than surprising considering the pandemic safety procedures casinos must follow. Visitor capacity was halved, and patrons had to follow strict social distancing rules. While that hurt peak times, demand was constant enough to win over.

Online gambling helped operators survive the worst of it, but the revenue that came in hardly made up for the loss. “Call it intuition or just plain luck that internet gaming made its debut in Pennsylvania casinos in July 2019,” Hannah Bowser and Frank Gamrat wrote. “While not all casinos in Pennsylvania offer online gaming options, for those that do, total internet gaming revenue (including online table games, internet slot machines and online poker) jumped from $13.9 million in January 2020 to $50 million in June, an increase of 258.6 percent.”

“[A]lthough online gaming revenue from slots, table games and poker rose to record setting highs, the total intake from January through June ($206.6 million) doesn’t even cover a quarter of the estimated losses from slot and table games,” they wrote.

Although Pennsylvania casinos reopened in June, they are estimated to have lost as much as $140.3 million in that month as well. That’s better than the roughly $200 million a month they lost during the totally lost months of April and May, but still a far cry from pre-pandemic numbers.