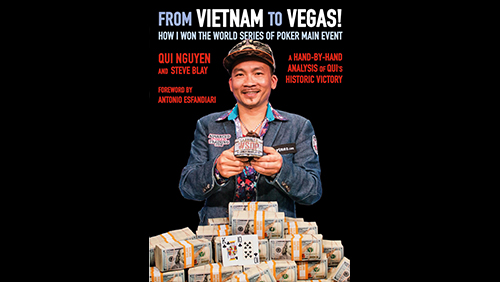 The 2016 WSOP Main Event was one of the best to take place in the last decade. Looking back, the tournament had it all. It had Will Kassouf’s infamous ‘Nine high like a boss’ moment of cringe-inducing comedy, it had the resulting fall-out between Griffin Benger and Kassouf in which neither man covered himself in glory and, of course, it had Cliff ‘Johnny Bax’ Josephy and the moment that will haunt him forever.

It’s easy to put it in such plain terms now, but how easy was it exactly for Nguyen to seal the deal? It turns out he wrote a book explaining in detail.

Surprisingly, the WSOP Main Event champion doesn’t always write a book describing what it was like to win the biggest poker tournament on Earth. We’d like to see this rectified in future years when live poker is back – playing inside a giant square bubble can’t have too long a shelf-life – and each winner commissioned ahead of the tournament to work with a talented ghost writer in putting together a tale of the tape.

Nguyen worked with poker author Steve Blay in putting the book together and was 40 years old when the book was released in 2017. This is quite a neat time for the book and the story to come to life, as it’s a life-changing milestone in most people’s lives, but the sense from the book is, a little like the Rocky films, that the victory was more of a closing chapter on Nguyen’s WSOP legacy than anything else. It’s hard for it not to be, such a life-changing win affecting anyone in that position.

How some players win a WSOP Main Event and then play so frequently – a good example might be Ryan Riess – is beyond many fans and I count myself amongst them. If you leave a job – any job with $10 million or so in the bank – and you’re under the age of 50, you can do so much outside the poker bubble. It’s to players like Riess’ credit that they continue to love and promote the game so much.

Nguyen left Vietnam at the age of 24 and made his way to the land of the free. Having worked in a nail salon, he then moved to Las Vegas at the age of 30 and only started playing poker aged 26. To say that from low stakes cash games to win the WSOP Main Event is a miracle is to play down the effort involved – miracles are typically situations of extreme fortune rather than hard work – but Nguyen’s sole WSOP cash before the big one was a $9,029 result in a $1,500-entry NLHE event in 2009.

Nguyen’s story is a fascinating one and between the many hand breakdowns (at 170 of these, they are perhaps a little too frequent), there are some poignant moments that come from understanding the Vietnamese American player’s family history. I spoke to him in 2017 just after the book’s release and he was a walking selfie machine, the simple walk to or from the tournament tables with each event being a three-minute walk down the Rio corridor that genuinely took him 15 minutes because everyone wanted a picture with him.

Nguyen’s background and subsequent successes mean you can’t fail to root for him and the book, published by D & BB Publishing, celebrates this brilliantly. At 430 pages, you really do get the complete picture and although modesty from his co-author makes the aside shorter than perhaps it deserves, one of the most interesting points about Vguyen’s victory is the serendipitous meeting between him and Steve Blay. Because Blay isn’t just the poker-based co-author of the book. He’s also the man who created software that predicted Nguyen would win in a series of simulations created by the man behind an advanced poker training website.

Inspired by this fact, Nguyen flew Blay to Las Vegas during the final table play-out and like a super-smart rabbit’s foot, Blay and the simulations were proved to be right. What that says for belief, intentions and the assumption and visualization (or simulation) of success could be further explored in the book, but is also a subject that could dominate a poker book in its own right.

With a foreword from former Big One for One Drop winner and WSOP Main Event co-commentator Antonio ‘The Magician’ Esfandiari, the book is a fun one to read and captures the imagination of any aspirational amateur looking to turn their dreams into millions of dollars in the Main Event.

You can buy the book in digital form right here and we’d recommend it as a great read to replace the World Series vibe that Las Vegas can’t provide this summer.

Antonio Esfandiari commentated on Nguyen during the Main Event final table, saying : “I couldn’t get a read on Qui Nguyen if my life depended on it.” Thanks to this publication, that need never be the case again.