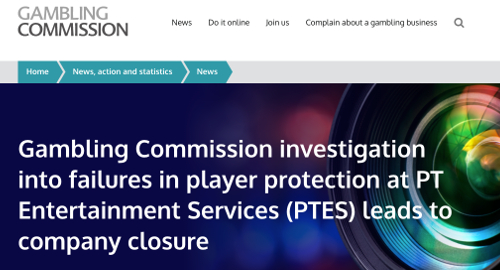 On Wednesday, the UK Gambling Commission (UKGC) released the findings of its investigation into PT Entertainment Services (PTES), a Playtech offshoot that formerly operated the TitanBet and Winner brands in the UK (and still does outside the UK).

The probe was launched in March 2019 after the UKGC received communications from the family of a 25-year-old UK man who committed suicide in April 2017. The man, identified by UK media as Sheffield resident Chris Bruney, held accounts at both TitanBet and Winner.

The UKGC probe identified “serious systemic failings” in PTES’ social responsibility and anti-money laundering (AML) processes, as well as “more general failings” in the operator’s interaction with its high-spending customers. During 2016-17, PTES sent responsible gambling emails to only 0.26% of its customers, a figure the regulator called “exceptionally low.”

The probe found that Bruney opened a Winner account in late-December 2016 and deposited over £148k before his suicide the following April. The day he opened his account, his bank declined two attempted deposits from his debit card but Bruney went on to successfully deposit £18,700 in the first two days after opening his account.

Three days after Bruney opened his account, an internal PTES email noted that Bruney had incurred a net loss of £22k, despite the company having no idea as to what he did for a living. Yet PTES didn’t conduct any source of funds checks until Bruney attempted to withdraw “a substantial amount” of his winnings.

PTES not only failed to carry out any responsible gambling customer interaction with Bruney, it gave him a free Apple Watch and invited him to join the operator’s Exclusive VIP club, where other free bonuses and promotions awaited. PTES also emailed Bruney with what the UKGC called “an inducement to encourage more and higher levels of play when PTES had not assured itself that such play was affordable.”

Shockingly, Bruney deposited and lost £119,395 in the five days preceding his death on April 5, during which time his family reported he received £4,500 in bonuses from PTES. The final bonus of £500 was deposited into Bruney’s account several hours after he’d taken his life.

Playtech told the Daily Mail that it took “full responsibility” for its social responsibility failings but denied that those failings were responsible for Bruney’s suicide. The company also said it had “invested significantly” in ensuring there would be no repeat of these failings.

PLAYTECH NOT OUT OF THE WOODS YET

PTES surrendered its Titanbet and Winner UK licenses before the conclusion of the UKGC probe, leaving the regulator with little means of enforcing any kind of penalty on the sites. The UKGC said Wednesday that it would have imposed a £3.5m penalty and possibly additional sanctions on PTES had the company remained under its licensing regime.

The UKGC noted that, prior to PTES surrendering its UK licenses, the company made a number of settlement offers that the regulator deemed “seriously deficient.” PTES went on to donate over £619k, equal to the sum it proposed as a settlement, to responsible gambling charities.

Playtech pledged a further £5m donation to charity over the next five years but UKGC CEO Neil McArthur warned that “investigations into the role played by key individuals at PTES are continuing.” Those execs who continue to hold UKGC personal licenses could face “appropriate action” following the completion of those investigations.

The UKGC has been getting tougher with operators’ VIP schemes, including restricting VIP incentive programs to individuals over 25 years of age and requiring “full audit trails” of VIP managers’ decisions on incentivizing high-value customers.