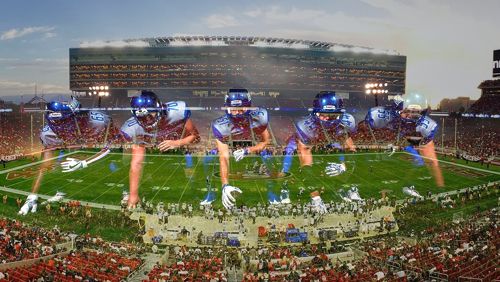 The 2018 NFC championship game between the New Orleans Saints and the LA Rams resulted in a change in rules the following season, all because one referee was too blind to see something that was taking place six feet away. Without being able to challenge pass interference on the part of Rams cornerback Nickell Robey-Coleman, the Saints lost a huge play and, ultimately, a chance at the Lombardi Trophy. Everyone knew what happened – even those in the cheap seats saw it and league officials would later sheepishly try to make amends. Starting with the 2019 season, it added a rule that would allow pass interference calls (or non-calls) to be made by coaches. However, the league still can’t get things right and even NFL Executive VP of Football Operations Troy Vincent admits that it “failed miserably” at implementing the rule. As they say, the third time’s the charm, so perhaps the NFL will get things right in the upcoming season.

In speaking with NBC Sports on the idea of the new sky judge coming to the league this year, Vincent explained, “We cannot fail this year. We saw, a year ago, when [the pass interference rule] played out, starting with myself, what we put in place last year … Those outcomes were not good for professional football. Because we didn’t do the proper due diligence, it played out publicly. The last thing people should be talking about is the way the game is officiated. They [officials] should be faceless objects, managing and facilitating game flow. We failed. I’m first in line. I shared that [with league officials]. I failed as the leader of that department. I failed. We cannot allow that to happen again. What did we learn from that? We’ve got to do our due diligence. You can’t rush and just shove something in there without knowing all the consequences. And we found that out last year, live and in action, publicly.”

The pass interference review was only in place for one season as a test, and the league decided not tomove forward with it. The introduction of a sky judge for the upcoming season is meant to give more officiating eyes on the game, with this official able to countermand calls made directly on the field. He, or she, will have access to instant replay technology and can chime in at virtually anytime. Of course, if the official is chasing butterflies, it becomes a useless position.

The NFL is also exploring a different rule change regarding the onside kick. Tom Pelissero of the NFL Network shared the change on Twitter, and it seems to address the lack of success of onside kicks in previous seasons. However, as with previous attempts to introduce new rules, the NFL brass apparently didn’t think things through. After just a cursory glance, one coach told Albert Breer of Sports Illustrated that he saw gaping holes in the implementation, with the rule being turned into an offensive weapon that could easily compromise the sportsmanship of football. In his own words, “There are some interesting scenarios that could arise. Take the lead with 5 seconds left, choose the 4th-and-15 option and run out the clock. … Up by a score with 10 seconds left, instead of squibbing, take the 4th-and-15, run as much time off as possible, take a safety then kick with only a couple seconds left.”

Once again, it seems the league is content with establishing policies and procedures that result in either half-baked ideas or half-baked implementations. Perhaps it can capitalize on the current situation to dedicate additional time to training its officials better and implementing rules that serve the game, not the wallet.