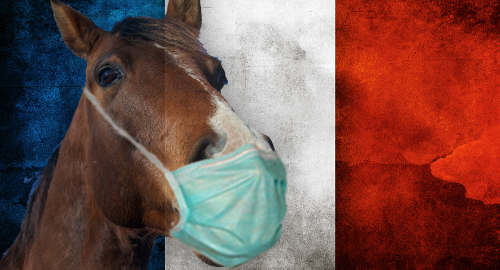 France’s horseracing sector felt the regulatory whip this week after it was ordered to halt activity in some regions that had only just relaunched following their COVID-19 closures.

On May 11, French racing resumed operations on a ‘behind closed doors’ basis, marking the triumphant return of an activity that was forced to halt on March 16 as the pandemic continued to spread. But on Tuesday, French officials warned that operations in some regions will once again be ordered to put their nags back in the stable.

France Galop and Le Trot, the nation’s two racing authorities, issued a statement saying the government had divided the nation into ‘green’ and ‘red’ zones, with red indicating areas in which new COVID-19 infections continue to be reported.

The red zones include Ile-de-France, Hauts-de-France, Grand-Est and Bourgogne-Franche-Comté, regions that feature a number of major courses, including ParisLongchamp, Saint-Cloud and Auteuil. The governing bodies said the government would issue new orders specifying that red zone courses would need to close (again) until further notice.

The authorities expressed regret at the development, noting that the tracks had “scrupulously respected” the closed-door protocols and that no new infections had been recorded among those participating in the spectator-free racing. But for now, the task is to reschedule racing meetings that were supposed to occur in red zones over the next few weeks.

France’s aborted celebrations will provide further second-guessing on behalf of the British Horseracing Authority (BHA), which has set a June 1 target for resuming its operations. Meets have already been scheduled for the first eight days of racing but the BHA’s protocols for racing behind closed doors have yet to be published.

In Ireland, the plan is to resume activity behind closed doors on June 8 at Punchestown. Initially, only nine centrally located courses will be allowed to resume activity, with other courses possibly getting the nod three weeks later, assuming all goes according to plan. The Irish Derby is hoping to stick to its June 27 target, although the lengthy shutdown means the prize fund will be cut in half.