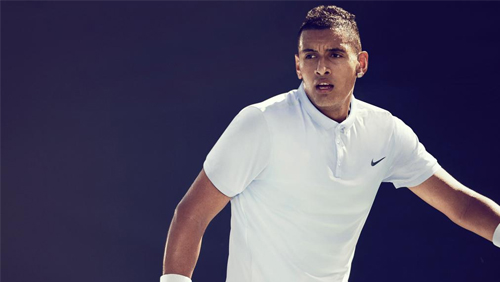 Going into lockdown has, for many, been a trial. But just imagine your partner or family member was replaced by a sportsman. Pick the most difficult, potentially uncompromising person you can think of. Now double it, treble it, throw in a wardrobe that would make Zoolander blush and you should have arrived at the same answer.

It’s impossible to say how unique the now 25-year-old Kyrgios is in the tennis world. He almost doesn’t belong in the game at all, so different is he to the others. He’s like a NBA basketball player in a Hollywood movie who woke up with his talent having been swapped with a Wimbledon champion.

The sad thing is that Kyrgios almost doesn’t know how good he is, doesn’t know how to be consistent enough to become a Grand Slam winner despite having the natural attributes to build that kid of tennis game.

When it comes to opinions, however, Kyrgios is the daddy of them all, proving one of the most entertaining sportsmen to follow on social media.

The recent Virtual Madrid Open was won by Andy Murray, but rather than put himself forward as a competitor, Kyrgios couldn’t resist a jibe at the tournament’s expense.

Play CALL OF DUTY OR FORTNITE SO PEOPLE ACTUALLY WATCH OR FIFA https://t.co/HmqXtVz0kB

If that wasn’t enough, Kyrgios then poured scorn on the suggestion from Roger Federer that the WTA and ATP Should merge.

Did anyone ask the majority of the ATP what they think about merging with the WTA and how it is good for us?

But if there is anyone with whom Kyrgios has special beef, then it is Rafael Nadal. The two men have an enduring rivalry that tennis fans love to watch, as highlighted in the tense-but-terrific showdown at the Aussie Open back in January.

The idea of Kyrgios and Nadal sitting down to chat is but a dream in this age of social separation. However, with many sports stars conducting interviews on Instagram, when the BBC put out a recent poll which fans could choose two players they’d like to meet online and talk, two mens names came up.

The Australian was ready to go, replying himself, “’Rafa, let’s do Instagram live together. I am down with it. Let’s do it.’

However, the Mallorcan conducted an interview with La Voz de Galicia where he was quick to shut it down. “I don’t mind doing a live with Nick” said the 19-time Grand Slam champion, “But there’s a generational gap and he might have more fun with someone closer to his age and style.”

As it stands, Kyrgios will instead chat with British tennis legend Andy Murray on Saturday afternoon at 3.00pm UK time, the Instagram Live session starting at midday in Oz.

SATURDAY – UK 3pm / Australian 12 AM @andy_murray and I are gonna Instagram live and have a fair bit to talk about, whos gonna tune in?

It could be that we’ll have to wait until tennis returns for real to see Nadal and Kyrgios clash again. Of all the match-ups we’re looking forward to, it’s the rematch we can’t wait to see more than any other.