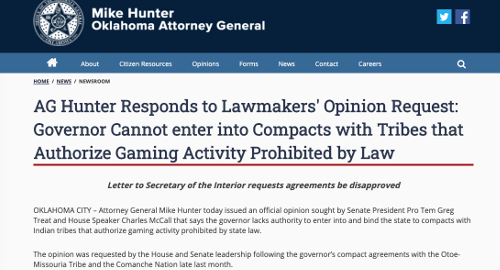 The two compacts not only allow the tribes to build new casinos off tribal land on properties taken into trust by the government, they also authorize the tribes to add sports betting to their gaming palette, despite Oklahoma legislators having yet to authorize legal wagering anywhere in the state.

Hunter’s opinion was in response to requests by state House and Senate leaders, who maintain that Stitt’s new compacts are a direct challenge to their authority to have the final say on gaming issues. Hunter concurred, ultimately concluding that Stitt “lacks authority to enter into and bind the state to compacts with Indian tribes that authorize gaming activity prohibited by state law.”

Hunter also sent a letter to federal Secretary of the Interior David Berhardt, whose office is required to approve tribal-state gaming compacts. Hunter asked Berhardt to reject Stitt’s requests “because they are not authorized by [the Indian Gaming Regulatory Act] and out of deference to determinations of state law made by the legal officials of the state.”

Hunter added that Oklahoma “deeply values its relationship” with its tribal nations and said they deserve “the respect of knowing that, when state officials make promises to Indian tribes, those officials have the authority to bind the State to such agreements.” Approving Stitt’s compacts will therefore “only cause greater confusion and uncertainty about how state-tribal relations should be appropriately concluded.”

TRIBAL CASINOS WARY ABOUT REOPENING
Like other states, all Oklahoma casinos have been shut since mid-March due to the COVID-19 pandemic. Stitt recently announced a ‘measured’ reopening plan for state businesses, and two casinos – the Tonkawa Hotel & Casino and the 7 Clans First Counsel Casino – opened their doors on a limited basis (no table games, mandatory face masks, etc.) last weekend.

On Monday, the Cheyenne & Arapaho tribes said their six Lucky Star casinos would open on May 15 with every other slot machine switched off and mandatory temperature checks for all guests. Most of the other tribal operators appear to be adopting a wait-and-see approach, saying only that their current lockdowns extend through May 15 and they’ll update the market as needed.