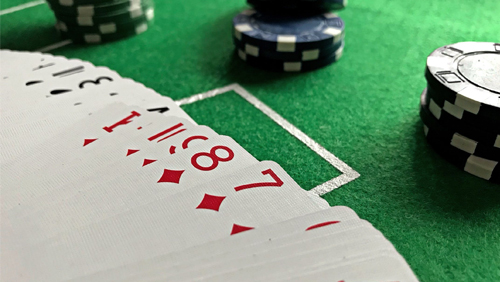 Each week, we take a look at a moment poker was on screen. Televised poker has a history that is as chequered as a chess board and as dramatic and ever-changing as poker strategy itself. While some concepts for bringing the game to the small screen flourish, like Poker After Dark or High Stakes Poker, others crash and burn, like this week’s example of TV poker gone wrong – 2007’s Ace in the House.

The idea of Ace in the House is one that screams to be commissioned. A popular poker pro heads to an amateur home game and tries to win the money on offer. On December 3rd, 2007, the Game Show Network put out the first and only episode of the show.

The poker pro in question was Mike ‘The Mouth’ Matusow.

The show did a decent job of building up the contestants and setting up the premise itself and it was a good idea. As you can see from the opening section of the show, everyone seems fairly happy.

In the second part of the pilot episode, it’s clear that Matusow isn’t going to hold back any of his famous backchat as he gets rivered in a pot so ugly even its mother can’t bear to look it in the face-card. Thankfully, Mike – referred to by his Christian name presumably as a way making him seem one of the guys – steps on the gas to win a few pots by intimidating his amateur rivals.

In the middle section, pair over pair sees Mike chip up, while a coinflip sees another bust-out reduce the field further. At one point, Matusow is heard to remark, ‘Want me to shell some peas while I’m at it?*’ *not really.

It’s not long before another players bites the dust, with Matusow picking up pocket kings. This is the problem with having a ringer in any home game. If they get lucky, then it’s a viewing disaster. It’s a little like watching Roger Federer take on a trainee and the neb’s tennis racquet being mashed over their own head before the first serve.

All that remains is for Matusow to sweep up a simple heads-up battle that gets even simpler when he manages to luckbox a set on the turn when all-in pre-flop with pocket sixes against ace-nine. A nine comes on the flop too, and you can see some clenched teeth on show when Matusow is presented with the cheque for $10,000. ‘The Mouth’ looks suitably embarrassed, but four years after Moneymaker won the WSOP Main Event, did anyone think it was a game of luck?

It’s not that Ace in the House was a bad idea. Indeed, it was a decent idea which given a chance, could have been a fun and entertaining six-part series. It would still work now. But if you’re thinking of remaking it now, here are the corrections we’d make right off the bat:

1. Make the ‘poker pro’ someone who we would actually be happy to see winning, or who is philanthropic in some way, force them to donate it to charity or something.
2. Rename the show ‘All-In Your Home Game’ or ‘All-In Back at Yours’. Anything other than Ace in the House, which sounds like a detective show which would also fail.
3. Get some funny commentary over the top of the action. Joe ‘Stapes’ Stapleton would be perfect for this.
4. Have a ‘Get Out of Jail Free’ card for each amateur that they can play once, either to double their winnings in a pot or escape a bust-out or something. Chips alone won’t do it.
5. But give them more chips, though. If the pro is any good, they should be able to make a fist of it from a far worse starting position.
6. Replace Mike Matusow as the ‘poker pro’. Yes we know this was our first point; it’s worth reiterating for clarity.

Some shows just aren’t meant to be. Others are of their time. It could be argued that Ace in the House fits into neither of those groups and might be at its best being completely reinvented as if this monstrosity never existed in the first place.

Wonder if ‘The Mouth’ kept his trophy?