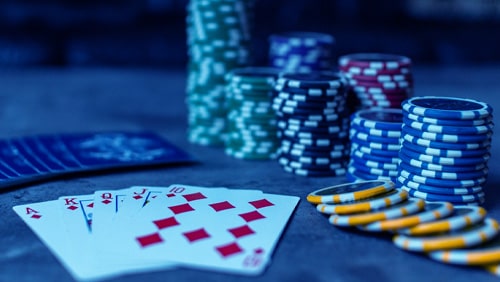 In the latest of our series on the times poker has been on screen, we’re featuring a series dedicated to the might and majesty of the world’s greatest card game, Poker After Dark. Having run since 2007, Poker After Dark is one of the most popular series to ever cover the game and has returned to our screens in recent years on the PokerGO platform. What makes Poker After Dark so popular? Let’s take a look.

Poker has long been a game that was viewed as an underground pursuit, a card game played through cigar smoke. Though that all changed in one moment when Chris Moneymaker won the 2003 World Series of Poker Main Event, the dark set design and intimate player surroundings made for a show that, when originally broadcast on NBC in 2007, felt like a retrospective, a callback to a bygone age.

If you want to look back at the most recent series in 2019 and have an active subscription to PokerGO, then you can check out the recaps from that series right here.

The format could well have been swamped by the popularity of High Stakes Poker, a show that shares a resurrective existence with Poker After Dark on PokerGO in recent times. After all, High Stakes Poker had big cash games, big names and big pots. All three were also on Poker After Dark, but the cash game competition was added to by having a tournament edge to its ending, which lent other elements to the show’s style.

The familiarity of the show with its players was a major USP of the appeal, too. Player interviews towards the end of the show gave the show an early lead in poker broadcasts that turned to analysis to keep fans interested well after the hands were finished. The way that players such as Tom Dwan, Phil Hellmuth or Doyle Brunson break down a hand makes for fascinating viewing, and each presenter, from Shana Hiatt and Marianela Pereyra in the early days and Leeann Tweeden and Drea Renee from Season 4 to the present day get the best out of the players.

Once filmed at the NBC Studios, the show is now broadcast in a slightly longer format from the PokerGO Studio at the ARIA Resort, and with 474 episodes, there are plenty of highlights to draw from.

Over the years, some of the biggest names in poker have appeared on the show, with stars such as Mike Matusow, Daniel Negreanu, Maria Ho, Phil Hellmuth, Dan Cates, Scott Seiver and Huck Seed all taking seats when the lights are down low.

This episode featuring some huge World Champions was a ratings winner!

Poker After Dark is the perfect example of a series that knows exactly what its good at and what its limitations are. With expert commentary often provided by Ali Nejad, particularly in the early seasons, the game flows brilliantly, and the Directors Cut episodes featured on PokerGO are genuinely insightful, not only into the strategic points of poker from elite players’ points of view, but as a time machine into how players used to behave at the felt.

The cameras rarely leave the studio but do sometimes wander close by in the early series to provide some added context. That said, most of the action you get is from the tables and that is exactly what makes Poker After Dark such unmissable poker television.