After Macau was forced to shut down the city for a couple of weeks in February in order to curb the spread of the coronavirus, it hoped that a quick recovery could begin once the borders were reopened. However, this hasn’t been the case, partially because of travel restrictions in China’s Guangdong province, one of the largest feeder markets for the gambling city. Easter week was a huge disappointment for Macau, but things aren’t getting better as time progresses. Representatives from Inside Asian Gaming (IAG) paid a visit to several casinos in the city this week, and what they found doesn’t bode well for any type of quick recovery. 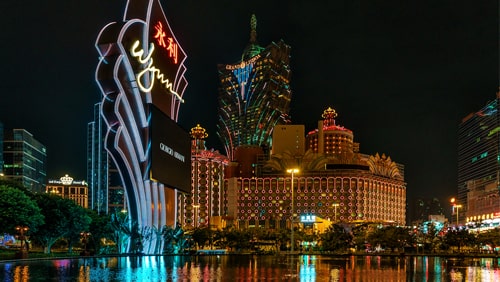 IAG performed a spot check of 11 of the largest integrated resorts in Macau this week to determine how many gamblers were showing up. They targeted The Venetian Macao, Parisian Macao, Sands Cotai Central, City of Dreams, Wynn Palace, MGM Cotai, Galaxy Macau, Grand Lisboa, Wynn Macau, MGM Macau and StarWorld, and visited Tuesday, Wednesday and Thursday afternoons. The casino patrons how had showed up at the venues must have felt like they were in a ghost town, and might have enjoyed the hit any game without delay, as each gaming floor reportedly had, on average, only seven players at the tables and eight at the slot machines.

IAG explains, “Notably, the busiest gaming floor of all when IAG visited was MGM Macau with 10 table game players and 25 on slots, followed by Grand Lisboa with 10 at the tables and 14 on slots. Sands Cotai Central, which is also undergoing major renovation works that will see it transformed into The Londoner Macao, was the quietest with just a single player on slots.”

Tuesday appeared to be the busiest day, as, of the four casinos visited, there were a total of 92 people. On Wednesday only three casinos were visited, but the tally only reached 46. Yesterday, despite IAG hitting four casinos again, the number was even lower, with just 33 heads counted.

Although travel restrictions have been slightly relaxed, gamblers apparently are still not ready to make their way to Macau’s casinos. The city has already been walloped by COVID-19, with March witnessing a year-on-year revenue decline of almost 80%. This, as the vast majority of casino tables had their covers removed and new decks of cards waiting since the middle of March.

As a result of the slower-than-slow traffic, economic recovery for the city, and for the casino operators, is going to take a long time. Coming off a 2019 that was not as productive as Macau had hoped, the current situation is exacerbating the situation. This could make a recovery impossible for several more years, especially since April is expected to see gross gaming revenue that is lower than the headcount seen this week at the casinos.