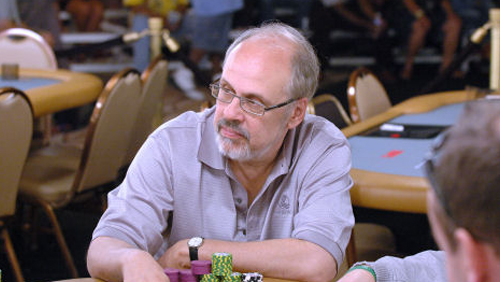 Some of poker’s most seminal works appeal to the simplest instincts in us all. One such book is a volume of poker strategy that since it was released in 1999 and has continued to sell well and be recognized as one of the classics ever since then.

David Sklansky’s Theory of Poker explains several different variations of the game of poker, from the most popular of the game formats, No Limit hold’em, to lesser-known variants such as Five Card Draw, Seven-Card Stud and Lowball Draw to name just three.

Sklansky is by no means lacking in confidence when it comes to explaining his thoughts on the game, and his ‘Fundamental Theorem of Poker’ is something that he applies to your game. The presumption is definitely that you’re picking up this book as a gateway to playing poker, so if you’re already a very competent NLHE player, for instance, you’re not likely to learn too much other than rebuilding any fundamentals you might struggle with or have slipped into bad habits in.

Even if you’re a NLHE expert, however, you might learn a thing or two about other ways to play poker. If you believe that you’ve already mastered one format, you can probably adapt your skills to another by following the path laid out in The Theory of Poker.

There are chapters on deception, slow play (boo!) the traditional bedrocks of advice bluffing, semi-bluffing and raising, as well as outlines on basic such as playing position, game theory and implied odds. While GTO and other advances do relegate some of Sklansky’s advice to that of archive footage, it still inspires to this day and other areas of interest such as heads-up play and psychology contain nuggets of information that are valuable weapons to add to your arsenal.

While the volume is fairly short for what it offers you – 301 pages to discuss many different variants of poker tells you the level of details each game hope to convey – plenty of big-name players you love today learned from the typewriter of David Sklansky. 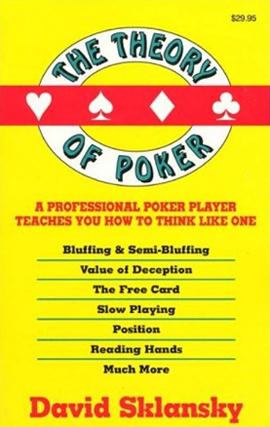 As brief as each section has to be, there aren’t many wasted words. This has pros and cons, with the contents all likely to be useful to the beginner, with the mathematics and applications behind each piece of strategic advice logical and practical in equal measure. The writing is tight, informative and gets to the point. The only downside of this is that the writing isn’t as entertaining or fluid as some other (perhaps more focused format) poker strategy books.

While The Theory of Poker has been overtaken in terms of specific poker strategy in recent times, and there are better books for the beginner out there, it’s easy to see why this volume of poker theory has proved so popular over the years. It forms a springboard for players who have never played the game before to jump off and discover their own route to loving the game, obsessing over getting better and ultimately, probably writing advice that is more advanced than this.

As a gateway to poker learning, there are few books better than David Sklansky’s The Theory of Poker, even 21 years after it was released. You can get a copy of it right here.