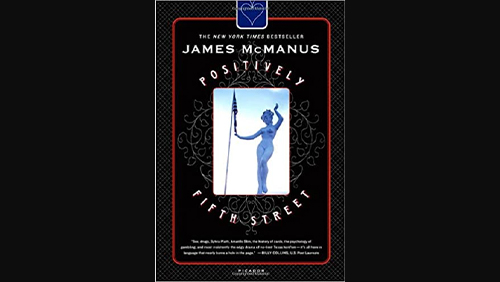 This week’s Poker in Print is no ordinary story. In fact, it’s an extraordinary tale even without knowing anything at all about the game we all love.

Released in 2004, Positively Fifth Street is a book written by Harper’s Magazine journalist James McManus, who was sent to Las Vegas and the World Series of Poker in particular to write about women playing in the WSOP.

That McManus never wrote that article is one thing, but the fact that he spent the money he was given to play the WSOP Main Event itself is quite another. Instead of reporting on women playing the Main Event, or at the World Series, McManus looked into the grisly murder of Ted Binion, the tournament’s host, who was allegedly killed by a couple in Sin City.

Uncovering the truth behind the killing is tough going and not an easy read for those looking into it as you can imagine it wasn’t for McManus, either. Before too long, however, McManus is wrapped up in the neon attractions of Las Vegas and the World Series himself.

He plays a $1,000 satellite to the Main Event and manages to win a ticket. From there on in, you’re rooting him on – or not – as he goes for glory.

McManus’ book has all the lure of a lurid hard-boiled true crime story in its potential, but it quickly dissipates into a look at the lower instincts of man. McManus knows he shouldn’t be playing the Main, but he does it anyway, and it takes over his moral compass as well as his emotional wants and needs.

Reading about how that happens is truly fascinating. You can almost hear the cogs in his brain working as they re-wire and pivot to succeeding at poker rather than journalism. That he’s able to blend them is incredible and would not be maintained in a professional sense, despite creditable earnings over the years we won’t give away the ending of the book and his Main Event of 2000).

McManus would not convert into a poker player, despite running deep in the Main Event he played, the year that Chris Ferguson beat T.J. Cloutier heads-up for the title. He would be knocked out of the NBC National Heads-Up Championship by Ferguson in 2006, six years after the Main Event final table they shared.

McManus did, however, persevere as a journalist and writer and to date has written three non-fiction books, including the 2009 effort Cowboys Full: The Story of Poker. McManus has also written five fictional books, including Going to the Sun, which won the Carl Sandburg Award. His work on poker has been included in publications such as The New York Times, The Boston Globe, Harper’s Magazine and The New Yorker and McManus himself has spoken about the game at Yale, Harvard, Google and Goldman Sachs.