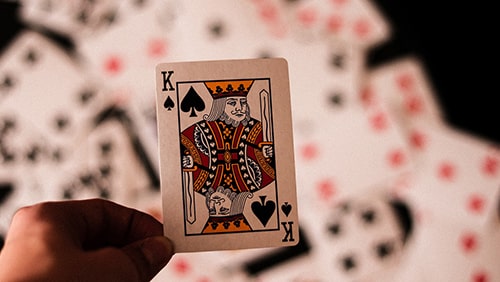 There are many poker books that give you the skinny on how to play the cards you are dealt and strategise upon which cards you should be playing. Many of these books are excellent, but they are often restricted to hands and can leave the average poker player wondering what to do when they actually stare their opponent in the eye.

Playing the cards in a profitable way can be learned, but what about playing the player not the cards, as Mike McDermott does so brilliantly in the film Rounders when he sits on the fringes of the ‘judge’s game’ and can’t resist telling each beak what they’re holding.

If playing poker is more about the player than the cards, then why aren’t more books about your opponents themselves rather than simply putting them down to a range of cards they like playing at the start of hands? Well, because doing so is immensely difficult.

Playing the Player by Ed Miller is a great poker book not because it teaches you about the cards, but because it coaches you on spotting the character traits in who you’ll face across the felt. Miller’s playbook on human personae critiques rocks and lets you learn how to make them bleed at the poker table.

Perhaps way more usefully, however, Miller’s tale teaches you how to get the better of tight-aggressive players or aggro players who play loosey-goosey with the three-bets even when they have fresh air.

Profiling poker players is part of any player’s arsenal, yet very often in poker – certainly at a lower level – players often focus on themselves rather than their opponents. How they’re playing themselves, what hands they choose to play, what their VPIP is and how they restrict themselves from giving away their hands all seems very important, but without discovering that knowledge from others at the table, how effective can it be on its own?

The book is really well written and engaging, which isn’t always the easiest with poker. The game itself may be pure drama, but it takes a lot of skill to make a strategy book about equally exciting. Ed Miller’s Playing the Player gets as close as it can do to this lofty aspiration.

This book currently isn’t cheap on Amazon, retailing at or around the $40 mark, which seems a lot for any book right now, so we understand if you’ll shop around rather than downloading it onto your e-reader right away.

If you want to purchase it, however, we’d recommend doing so and Playing the Player is available right here.

Could you become a poker pro during the COVID-19 pandemic?
Paul Seaton
9 November 2020
.