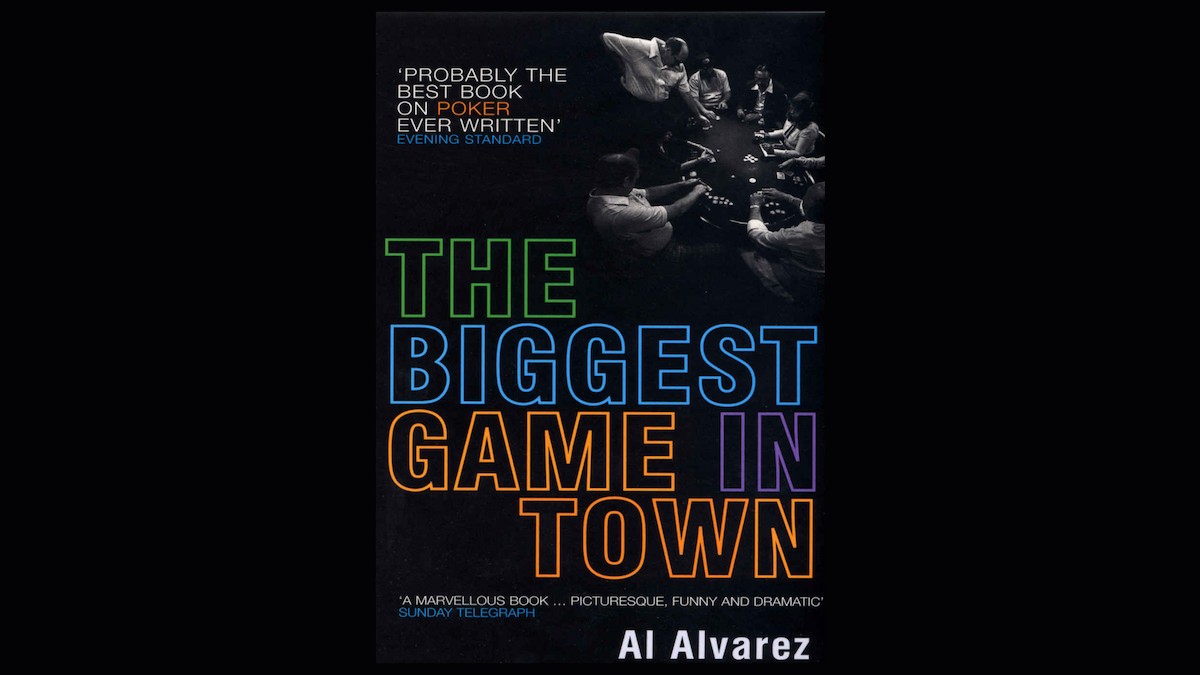 The latest book in our Poker in Print series is one of the earliest books that has been labelled as being definitive in its description of the game. Al Alvarez’ The Biggest Game in Town was written about the 1981 WSOP Main Event and was published two years later.

Over 35 years on, the book still resonates in the poker world. But is it a timeless classic or has its time, like the style of poker in 1983, had its time?

Far from being a poker diary, autobiography, biography or strategy guide, the book is the work of an acclaimed critic and poet in Alvarez, who would live a long and prosperous career writing on many subjects, of which poker was one of his favourites.

The world of High Stakes Poker in Las Vegas wasn’t nearly as accessible in 1983, just 13 years after the inaugural WSOP Main Event saw Johnny Moss voted into the winner’s circle as the best player by his peers.

Alvarez’ book, The Biggest Game in Town, tells a very different story to that we know of in today’s game. In an era long before ranges, maths wizards and 21-year-old winners such as Joe Cada, the depictions of players are those of wearier men. Sadly, because of the time, we can’t exactly say men and women and be true to the time period, because back then, men weren’t 95% of the field – they were the field and the game is undoubtedly a better place for players of both sexes taking to the felt.

Players are painted in their true form and the sense of style that Alvarez depicts is vivid. He shines a harsh light on Las Vegas with his evocative use of language and the rough edges are visible, but the story is all the more believable because of it.

We almost make it sound like a novel, don’t we? It’s not, and the real-life implications of what would happen in 1981 are clear and stark, but the way it is written calls more from Alzarez’ poetic literary style and makes it feel more like a narrative than poker ever truly supplies on its own.

The cult classic was given rave reviews when it was first published.

‘A cool, precise, sharply witty, vivid evocation of a place and people, their appearances, behaviour and speech. Alvarez is a shrewd analyst of the psychology of gamblers and a cleverly selective recorder of their bizarre talk with which, directly and indirectly, they reveal their secure grasp of unreality and their insane courage.’ said the Sunday Telegraph review of the book.

‘It will have most readers sitting on the edge of their seats’ Sunday Times ‘A new classic on gambling. It’s quite brilliant.’ As Time Out put it.

‘This is a magnificent book. Beyond the straights and full houses, Alvarez has written about people who are extremely good at what they do, and about America.’ – the words of the San Francisco Chronicle.

Since publication, The Biggest Game in Town has become a book of true poker legend – one that inspired a generation of writer and poker players to attempt many such tomes. There’s no doubt that Alvarez’ book inspired and influenced Anthony Holden’s Big Deal, a thrilling poker tale based in Las Vegas that was published seven years later in 1990.

The use of language is often more evocative of non-poker books and there is a fair amount of tangential description that could flummox the uninitiated reader or Vegas newbie. In a way, that’s not a slight on the book, because it gradually draws you in as a reader, however much knowledge of poker you came to read the book armed with.

No-one could know too much or too little about poker not to be enthralled.