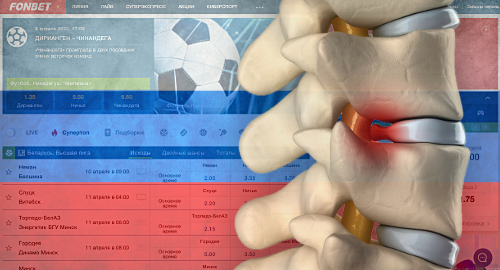 Russian sports betting operator Fonbet’s inclusion on a list of the country’s economic ‘backbone’ businesses appears to have slipped a disk.

Earlier this week, Russia’s leading bookmaker Fonbet’s parent company LLC F.O.N. appeared on a government list of ‘systemically important organizations,’ one of 646 companies whose financial health the government deemed important to the smooth running of the national economy.

Russian news agency Interfax is now reporting that the Ministry of Finance has proposed removing Fonbet from this list before the final version is issued on Friday (10). Interfax quoted a source saying Fonbet’s involvement in the betting industry is not the issue, as the Ministry has reportedly asked for several other firms on the earlier list to also be expunged.

Fonbet’s inclusion on the list irked some of its rivals, as the list seemed to single out Fonbet as worthy of preserving, while all Russian bookmakers are currently struggling due to the shutting of the land-based betting shops and the mass cancellation of global sports events.

The scale of those struggles was laid bare in financial figures from the First TSUPIS, the central payment processing hub of the First Self-Regulatory Organization of Russian Bookmakers (First SRO). One of two Russian betting associations, First SRO’s members include major operators such as Liga Stavok, 1xBet, Parimatch and BetCity.

The First SRO’s TSUPIS is operated by Mobilnaya Karta money transfer service, which recently estimated the impact of the loss of major sports events on its bookmaking clients. A document obtained by Russian affiliate Bookmaker Ratings estimates that First SRO members’ March revenue fell by 40-45% from what they’d generated in January and February.

The document went on to say that the First SRO members had “stabilized” their revenue at the present rate by adding new betting options, “primarily in the field of eSports.” Unlike their western counterparts, Russia’s online bookies aren’t allowed to offer casino or poker products, on which western sites are leaning hard during these uncertain times.